The original Lansdowne Road Stadium was a multi-sports venue including as it did a cinder track for athletics, a cricket pitch, a croquet green, three football pitches and facilities for archery and lawn tennis.  The first rugby match played at the ground was an inter provincial between Leinster and Ulster in December 1876.

In 1878 Lansdowne held its first international rugby fixture.  In the early 1900s the IRFU secured the lease of Lansdowne Road from the Pembroke Estate.  It was at this time that a plan was conceived to change the orientation of the stadium to North/South. Originally it had run from East to West.  The first stand was built in 1908. 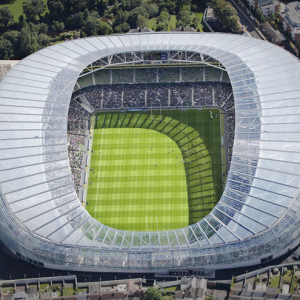 While Dunlop had conceived Lansdowne as a multi-purpose venue the ground soon became synonymous with rugby – although even in the 1950s a crowd of 40,000 witnessed Olympic gold medalist Ronnie Delany run there in an international athletics meeting.

The most modern part of the stadium, the East Stand was built in 1983.  It was during the 1980s that the Irish soccer team also made Lansdowne its home. The first football game at the stadium took place in 1971 when Ireland played Italy in a friendly.

In its old incarnation the Lansdowne Road Stadium was the oldest sports stadium in Europe.

The old stadium had a long an proud history of hosting world class athletics and sports events but it also has seen some of the world’s best artists including: Frank Sinatra, Liza Minelli and Sammy Davies Junior, Michael Jackson, Celine Dion, Neil Diamond, Bon Jovi, The Eagles, U2, REM.

The innovative transparent polycarbonate roof and facade design maximises daylight to the building interior, the pitch and surrounding residential/commercial properties. Use of EcoCem in the building of the stadium reduced the embodied energy of the building while also achieving a high standard of finish in the concrete. The CO2 saving achieved is calculated at 4000 tonnes, or 6,896,500 kWh of electricity.

Rainwater is harvested for use in the pitch irrigation system. The 320,000 litre tank is sufficient for approx. 7 days irrigation.

Lighting control system using intelligent control via PC’s along with PIR sensors are used to centrally control and monitor the 18,000 low energy light fittings throughout the stadium so lighting requirements can be managed very closely and kept as efficient as possible.

Four diesel powered 1700kVA generators  are fitted with heat recovery circuits cable of enabling 4MW of useful heat to be used for heating water for bathrooms, kitchens and the under pitch heating system.

Areas that are in use on an event day only (levels 01 and 05) are naturally ventilated. All pumps and air handling plant are the inverter drive type to reduce energy consumption. Energy saving features of the Building Management System include intelligent controls for energy consuming.

Sports lighting was carefully modeled, with glare shields and long visors specified to minimise light spill from the stadium bowl.

Services equipment was specified to emit not greater than 53dB at one metre to ensure the stadium has a minimal impact on background noise.

A fully integrated waste management system at the stadium supports a remove, reduce, recycle approach. Our annual onsite recycling target for 2012 is 80% of the waste generated and already we performing well with the May 2012 rate exceeding 94% for onsite separation and recycling.

Integrated public transport promotion covering all transport providers for staff and fans and the installation of a light rail forecourt at the nearby station help ensure enhanced amenity in accessing the stadium. Dedicated accessible parking for patrons with disabilities. Biodiversity protection / promotion through an artificial

Otter Holt in the Swan River culvert which flows under the north end of the stadium, low level lighting to prevent impact on Bat foraging behaviour in the area and installation of Bird Boxes within the stadium environs.

As a result of its Sustainable approach, Aviva Stadium has won several awards.

When looking after the needs of over 50,000 people on a match day including fans, stadium staff and support services there is the potential to generate a lot of waste. Aviva Stadium works on a ‘Remove, Reduce, Recycle’ approach in association with our waste partners Greenstar. The stadium ensure an onsite separation approach for the following waste streams: Cardboard – packaging and display unitsPlastic cups and bottles – soda bottles, plastic pint glasses, plastic milk bottles etc.Dry mixed recyclables – including packing and tetra pack similar to most households Compost – compostable food waste and grass clippings Glass – some bottles are returned to suppliers but the rest are recycled Cooking Oil – Professionally refined / repurposed WEEE – Electrical waste due to maintenance including light bulbs General Waste – the remainder that can’t be recycled such as crisp packets and contaminated waste. By separating these on site they are more cost efficient to have removed and it ensures less contamination when they are put through the recycling process. For the general waste that we can’t recycle we are working to try and remove as much of this from our waste streams as possible however in the meantime this goes through a ‘secondary recovery process’ that either converts it into fuel blocks or heat energy.

Aviva Stadium’s footprint allows you to host any type of event for a selection of guests from 2-2000. Spectacular gala balls, conferences/congress, meetings, exhibitions and outdoor events.

Showcase events, celebratory, welcome, educational events and much more are all welcome to Aviva Stadium.

As a BS8901 sustainable venue Aviva Stadium can offer organisers and guests the reassurance of choosing a venue that can assist the journey towards sustainability for your company and beyond.

The non-match day facilities consist of 15 distinct spaces over five of the seven stadium levels plus 36 corporate boxes with various capacities. Spaces vary in size but cover capacities from 2-800 pax in any one space. Also available is the state-of-the-art media auditorium with seating for 190 guests, key outdoor marquee areas and blank canvas event spaces. The majority of spaces have a unique vista overlooking the pitch.

Aviva Stadium is a unique multi-purpose event space, offering flexibility, superior catering and AV facilities matched with the highest levels of customer service for all guests.

The catering facilities in Aviva Stadium are second to none. The contract for all catering in the new stadium was awarded to Compass Catering Group who are also official caterers at Twickenham and the Millennium Stadium, Cardiff. In Ireland the Compass Group employs over 2,000 people across a wide range of corporate contracts and also to provide the catering at sporting venues such as Leopardstown and Fairyhouse.

The catering in Aviva Stadium is innovative, creative and varied to meet all diversity of tastes.

On match/concert day, the President’s Suite can host and entertain 450 guests with a ‘Chef’s Table’ offering dishes from around the world.

On the east and west sides of the stadium on level four there are 36 private hospitality suites each accommodating between 12 and 50 guests, the total being 848. The clients will be offered a range of bespoke menus and fine wines to suit their particular guest profile at any one event.