The American Football Croke Park Classic will see the University of Central Florida host Penn State in their 2014 Season Opener in GAA HQ on the 30th August 2014. This big season opener for UCF and Penn State will be the first time that UCF and Penn State have played outside the United States. 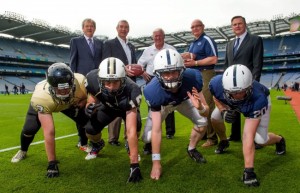 This American Football Croke Park Classic will see the University of Central Florida (UCF) host Penn State in their 2014 Season Opener in GAA HQ on the 30th August 2014. This is the first time UCF and Penn State have played outside the United States.

And 2013 was a very busy year for both teams with UCF completing the most successful season in their history and winning the American Athletics conference outright and the Tostitos Fiesta Bowl. Penn State welcomed new Head Coach James Franklin from Vanderbilt following Bill O’Brien’s departure to take up the post of Head Coach at NFL team Houston Texans.

The teams will compete for the Dan Rooney Trophy named after a key player in the GAA’s redevelopment plans for Croke Park in the early nineties. The trophy is made of bog yew and Pittsburgh steel.  The yew comes from what remains of forests which grew 4,200 years ago in the Irish midlands. The steel is from Heinz Field, home of the Pittsburgh Steelers.

Penn State and the University of Central Florida (UCF)

A delegation from Penn State and the University of Central Florida (UCF) visited Dublin this weekend to put detailed operations plans in place with the Croke Park team for the Croke Park Classic on August 30th.

A crew from both universities, including UCF Head Coach, George O’Leary, and Penn State’s Director of Athletics, Dave Joyner, along their backroom staff joined the team at Croke Park to run through logistics plans ahead of their 2014 American College Football season opener.

This included a pitch transformation at GAA HQ as American Football posts were erected and pitch markings laid down. The American Football pitch size for the college game is half the size of the Croke Park pitch at 110m x 45m compared to 144m x 86m.  The visit was the first time the pitch plans had been laid out and game operations and production were also finalised.  The groups also visited the locations for citywide events including the joint Pep Rally and Tailgate locations at Dublin Castle and Temple Bar.

Peaking at the visit UCF’s George O’Leary said he is eagerly anticipating the Croke Park Classic clash, “It’s been great to put the last few operations plans together over the past few days.  Now we can really start to look ahead to the big game with excitement. We are really looking forward to putting on a show in Dublin.”

Since the team’s first visit to Ireland for the official announcement of the game last year, Penn State University have seen a change in Head Coach as Bill O’Brien departed for the NFL’s Houston Texans. He was replaced by James Franklin, whose first competitive game in charge at Penn State will be the Croke Park Classic.

Coach Franklin also can’t wait to arrive in Ireland for the season opener, “Our team is excited about coming to Ireland to play UCF and open the season. Irish fans of American Football and all of the Penn State fans traveling to Dublin will be in for an exciting game and a memorable experience. We’re looking forward to getting the season underway in front of a huge Penn State crowd at Croke Park.”

GAA Director General Páraic Duffy said, “It was great to welcome the colleges to Croke Park again this weekend.  Next time it will be for the big game in August which promises to be a great event for the city.”

With significant local interest in the American college football game between the University of Central Florida (UCF) and Penn State, and up to 20,000 fans expected to travel to Dublin, plans have been announced for citywide events around the Croke Park Classic on 30th August.

The stadium has confirmed that a joint Pep Rally will take place at Dublin Castle on Friday 29th August and it is expected that the coaches and some players will be in attendance. These fan gatherings, held the evening before the game to rally support for the team, are an important part of the ritual attached to American college football games.

The Croke Park Classic Pep Rally will feature a timeslot for each team with some of the squad, cheerleaders, marching bands and a taste of the pageantry that will come to life in Croke Park on game day.

The Tailgate Party will be held in Temple Bar on the morning of Saturday 30th August and tailgating tradition dictates that those attending the game will gather with family and friends to eat, drink and enjoy the build up to the game.  Both locations bring the American Football fanfare right into the heart of the city and will give travelling fans and locals the chance to mingle and sample part of the match day experience from both side of the Atlantic.

Both Pep Rally and Tailgate will be part of a host of events leading up to the event including a business forum in Croke Park during the week before the game, special pre game stadium tours and game day hospitality events.  For those travelling fans who are interested in experiencing some home grown games, the All Ireland Football Semi Finals will be played in Croke Park on the 31st August giving travelling fans an opportunity to experience live Gaelic games.

Plans are also gaining momentum for the events in the stadium that will make up the spectacular live event experiences being choreographed for the pre-game and half time shows.

The Croke Park Classic will be the first time the UCF and Penn State have played outside the US and the event comes on the back of the most historic season ever for Coach George O’Leary and the UCF team in 2013.  It will be the first game for Penn States new coach James Franklin and this competitive fixture will see these division 1 American College Football teams battling it out for the Dan Rooney Trophy.