This announcement was made by the singer this morning on 2fm. 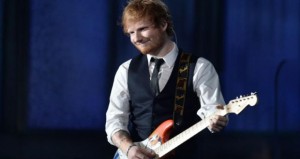 Ed Sheeran said his appearance at Croke Park will follow on from three sold-out shows at Wembley Stadium and he will then take a break for a year. The Croke Park tickets are expected to cost €69.45.

Ed Sheeran said he never considered playing Croke Park before because of the size of the stadium but he was now in the “peak of my career. I hope it keeps peaking as long as possible.”

The 24 singer, is one of the most successful artists in the world. His sold out for shows at the 3Arena in October and was the biggest selling artist of 2014 in Ireland. X, his latest album, went nine times platinum in Ireland and was the No.1 album in Ireland for 11 weeks.

Ed Sheeran said: “I always love coming back to Ireland. Irish audiences really are among the best in the world. I am so looking forward to stepping onto that stage in the magnificent stadium that is Croke Park on Friday 24 July”

Ed also revealed that he had three songs written for his next album, but had another year to write it. “I want to write a third album and make sure it is good. I don’t want to pass off any old thing.”

Ed Sheeran Tickets go on sale on Thursday 26 February at 9am.