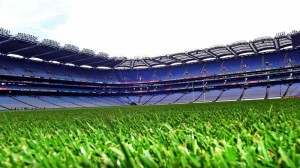 In 2011 Queen Elizabeth of England visited Croke Park the home of the GAA as part of her historic visit to Ireland; this visit placed the history and culture of the GAA right at the heart of modern Irish society. The GAA has been the very heart and soul of many communities the length and breadth of Ireland, the GAA is much more than a sporting organisation, and is more of a cohesive jell that has held together Irish communities through some very difficult times. The GAA can be found in many countries around the world where Irish people have now settled and made their home. The Special Olympics held in Croke Park 2003 presented the versatility and community nature of the GAA as being the very fibre of Ireland.

2013 marks the centennial anniversary of the naming and signing of the deeds for Croke Park/Páirc an Chrócaigh making it the Home of the GAA. More than just a stadium, Croke Park is now a world-class sporting and cultural venue, an Irish institution and a place of memories and stories, images and sentiment. Croke Park (Irish: Páirc an Chrócaigh, IPA: is a sports stadium located in Dublin, Ireland. Often called Croker by Dubliners, it serves both as the principal stadium and headquarters of the Gaelic Athletic Association (GAA).

Since 1884 the site has been used primarily by the GAA to host Gaelic games, most notably the annual All-Ireland finals in football and hurling. Both the opening and closing ceremonies of the 2003 Special Olympics, as well as numerous music concerts by major international acts have been held in the stadium. During the construction of the Aviva Stadium, Croke Park hosted games played by the Ireland national rugby union team and the Republic of Ireland national football team. In June 2012, the stadium was used to host the closing ceremony of the 50th International Eucharistic Congress during which Pope Benedict XVI gave an address to approximately eighty thousand people.

Following a redevelopment programme started in the 1990s, Croke Park has a capacity of 82,300, making it the fourth largest stadium in Europe, and the largest not primarily used for association football.

A fireworks and light display was held in Croke Park in front of 79,161 fans on Saturday 31 January 2009 to mark the GAA’s 125th anniversary. The area now known as Croke Park was originally an Athletics Course known variously as the City and Suburban Racecourse and “Jones Road” sports ground, the original home of Bohemians. It was originally owned by Maurice Butterly. From the foundation of the association in 1884 this sports ground was used by the organisation regularly for Gaelic games and Athletics. In 1896 both All-Irelands were played in the ground signifying the growing importance of the suburban plot for the ever expanding GAA. In 1901 Jones’s Road hosted the IFA Irish Cup final when Cliftonville defeated Freebooters.

Recognising the potential of the Jones Road sports ground a journalist and GAA member, Frank Dineen, borrowed much of the £3,250 asking price and bought the ground personally in 1908. Only in 1913 did the GAA come into exclusive ownership of the plot when they purchased it from Dineen for £3,500. Once bought, the ground became known as Croke Park in honour of Archbishop Thomas Croke, one of the GAA’s first patrons.

In 1913, Croke Park had only two stands on what is now known as the Hogan stand side and grassy banks all round. In 1917, the rubble from the Easter Rising in 1916 was used to construct a grassy hill on the railway end of Croke Park to afford patrons a better view of the pitch, which hosted all major Gaelic football and hurling matches in the latter stages of the All-Ireland championships. This terrace is known as Hill 16 and is the traditional stamping ground of Dublin GAA supporters when the Dubs are playing at Croker.

In the 1920s, the GAA set out to create a high capacity stadium at Croke Park. Following the Hogan Stand, the Cusack Stand, named after Michael Cusack from Clare (who founded the GAA and served as its first secretary), was built in 1927. 1936 saw the first double-deck Cusack Stand open with 5,000 seats, and concrete terracing being constructed on Hill 16. In 1952 the Nally Stand was built in memorial of Pat Nally, another of the GAA founders. Seven years later, to celebrate the 75th anniversary of the GAA, the first cantilevered “New Hogan Stand” was opened.

The highest attendance ever recorded at an All-Ireland Senior Football Championship Final was 90,556 for Offaly v Down in 1961. Since the introduction of seating to the Cusack stand in 1966, the largest crowd recorded has been 84,516.

During the Irish War of Independence on 21 November 1920 Croke Park was the scene of a massacre by the Royal Irish Constabulary (RIC). The Police, supported by the British Auxiliary Division entered the ground, shooting indiscriminately into the crowd killing or fatally wounding 14 during a Dublin-Tipperary Gaelic football match. The dead included 13 spectators and Tipperary’s captain, Michael Hogan. Posthumously, the Hogan stand built in 1924 was named in his honour. These shootings, on the day which became known as Bloody Sunday, were a reprisal for the assassination of 15 people associated with the Cairo Gang, a group of British Intelligence officers, by Michael Collins’s ‘squad’ earlier that day.

In the 1980s the organisation decided to investigate ways to increase the capacity of the old stadium. The design for an 80,000 capacity stadium was completed in 1991. Gaelic Sports have special requirements as they take place on a large field. A specific requirement was to ensure the spectators were not too far from the field of play. This resulted in the three-tier design from which viewing games is possible: the main concourse, a premium level incorporating hospitality facilities and finally an upper concourse. The premium level contains restaurants, bars and conference areas. The project was split into four phases over a 14-year period.

The first phase of construction was to build a replacement for Croke Park’s Cusack Stand. Completed in 1995 at a cost of £35 million, the new stand is 180 metres long, 35 metres high, has a capacity for 27,000 people and contains 46 hospitality suites. The new Cusack Stand contains three tiers, from which viewing games is possible: the main concourse, a premium level incorporating hospitality facilities and finally an upper concourse.

Phase Two of the development started in late 1998 and involved extending the new Cusack Stand to replace the existing Canal End terrace. It is now known as The Davin Stand (Irish: Ardán Dáimhím), after Maurice Davin, the first president of the GAA. This phase also saw the creation of a tunnel which was later named the Ali tunnel in honour of Muhammad Ali and his fight against Al Lewis in July 1972 in Croke Park.

Phase Three saw the building of the new Hogan Stand. This required a greater variety of spectator categories to be accommodated including general spectators, corporate patrons, VIPs, broadcast and media services and operation staff. Extras included a fitted-out mezzanine level for VIP and Ard Comhairle (Where the dignitaries sit) along with a top-level press media facility. The end of Phase Three took the total spectator capacity of Croke Park to 82,000.

Following the 2003 Special Olympics, construction began in September 2003 on the final phase, Phase Four. This involved the redevelopment of the Nally Stand and Hill 16 into a new Nally End/Dineen Hill 16 terrace. It was officially opened by the then GAA President Seán Kelly on 14 March 2005. For logistical reasons (and, to a degree, historical reasons), and also to provide cheaper high-capacity space, the area is a terrace rather than a seated stand, the only remaining standing-room in Croke Park. Unlike the previous Hill, the new terrace was divided into separate sections – Hill A (Cusack stand side), Hill B (behind the goals) and the Nally terrace (on the site of the old Nally Stand). The fully redeveloped Hill has a capacity of around 13,200, bringing the overall capacity of the stadium to 82,300. This made the stadium the 2nd largest in the EU after the Nou Camp, Barcelona. The new Wembley stadium has now taken over second place with Croke Park in third However, the presence of terracing means that for competitive soccer, the capacity is reduced to approximately 73,500, due to FIFA’s statutes stating that competitive games must be played in all-seated stadiums.

There are currently no plans for future expansion of the stadium. The Hill 16 end is unlikely to be developed further in the near future with a second upper tier (in line with the other three sides) due to the proximity of the railway line and the fact that there are houses immediately behind the raised wall on which the rail line runs. The GAA would have to buy some of the houses on Clonliffe Road to expand Hill 16 to anything more than a terrace. A further complication is that the railway line does not run directly parallel to the end of the pitch, which results in the terrace being smaller at the Hogan Stand side of the pitch.

The pitch in Croke Park is a Desso Grass Master pitch which was laid in 2002 replacing the existing grass pitch. This is a modern development in pitch design which couples natural grass with a stitching of synthetic fibres. The close proximity of the stitching and the natural grass roots growing around the stitching is what gives the pitch its stability and is the key to the success of this type of surface. The system is employed in sports venues in the Netherlands, England and the US.

Since January 2006, a special growth and lighting system called the SGL Concept has been used to assist grass growing conditions, even in the winter months. The system, created by Dutch company SGL (Stadium Grow Lighting), helps in controlling and managing all pitch growth factors, such as light, temperature, CO2, water, air and nutrients.

With the 2007 Six Nations clash with France and possibly other matches in subsequent years requiring lighting the GAA installed floodlights in the stadium (after planning permission was granted). Indeed many other GAA grounds around the country have started to erect floodlights as the organisation starts to hold games and training in the evenings, whereas traditionally major matches were played almost exclusively on Sunday afternoons. The first game to be played under these lights at Croke Park was a National Football League Division One match between Dublin and Tyrone on 3 February 2007 with Tyrone winning in front of a capacity crowd of over 81,000, which remains a record attendance for a National League game, with Ireland’s Six Nations match with France following on 11 February. Temporary floodlights were installed for the American Bowl game between Chicago Bears and Pittsburgh Steelers on the pitch in 1997, and again for the 2003 Special Olympics.