The Pride Parade will start at the Garden Of Remembrance on Saturday the 29th Of June 2013.

Assembly at 12pm and moving off at 2pm sharp 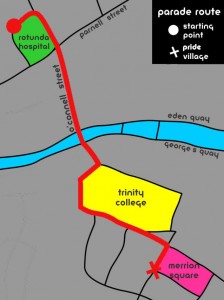 The festival will include a variety of conferences, plays and social events running over the next week. The festival’s highlight is the pride parade, which will take place next Saturday, kicking off at the Garden of Remembrance at about 12pm. Full ticket information is available on the pride website.

With just over a week to go to a Summer Serenade with the Dublin Gay Men’s Chorus, preparations are truly hotting up. Its first summer concert coincides with the annual Dublin Pride Festival and will take place in the inspiring surroundings of the chq building in Dublin’s IFSC on Sunday June 23 at 4pm. The chorus, Ireland’s only all-male gay choir, is the newest addition to the country’s LGBT choir fraternity having launched exactly one year ago. The Summer Serenade is completely free and a great way for all the family to spend a leisurely – and, it is hoped, a sunny – Sunday afternoon.

The chorus currently numbers 30 and it has been engaging in intensive weekly rehearsals for the concert since January of this year. David O’Shea is the chorus’s musical director: “We have been steadily building up our repertoire since our very successful Christmas concerts last December, and our performance on June 23 will include a wide variety of music, featuring popular songs, jazz standards, classical pieces, film music and all sorts in between —everything from Wagner to the Script.”

Barry Joyce, director of the chorus adds: “One year on and we are getting into our stride. There’s a great buzz both in and around the chorus and we are very excited to bring a new fresh and fun approach to choral singing. Our Summer Serenade concert promises to be light, bright and fun.”

Amongst the songs to feature in the varied repertoire are:

You make me feel so young – Josef Myrow

The chorus will also be performing at Gloria’s 18th birthday concert celebration in the National Concert Hall on Saturday June 15 and at Various Voices, a multi-national LGBT choral event taking place in Dublin in June 2014.