What is a Five-Star Hotel, a Four-Star Hotel and so forth? Hotel ratings are often used to classify hotels according to their quality in terms of standards of service and facilities. The development of the concept of hotel rating and its associated definitions display strong parallels. From the initial purpose of informing travellers on basic facilities that can be expected, the objectives of hotel rating has expanded into a focus on the hotel experience as a whole. 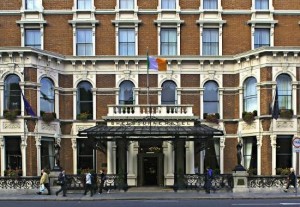 Today the terms ‘grading’, ‘rating’, and ‘classification’ are used to generally refer to the same concept, which is to categorise hotels, mostly using stars as a symbol. However, suspicion remains that Star-ratings were created for the purpose of pointing the money in the right direction.

In Ireland there are a wide range of accommodation vendors and simply because a Guesthouse does not poses some award or other does not mean that its personal service is to be ignored in favour of a concrete cube created to insure maximum efficiency rather than maximum customer care. There are a wide variety of rating schemes used by different organisations around the world. Many have a system involving stars, with a greater number of stars indicating greater luxury. Forbes Travel Guide, formerly Mobil Travel Guide, launched its star rating system in 1958. The AAA and their affiliated bodies use diamonds instead of stars to express hotel and restaurant ratings levels.

Dublin has a number of Five-Star Hotels and their location is set out on the map provided, it is no accident that all the Five-Star Hotels in Dublin appear to follow a clear line that avoids those areas normally off-track for the big spenders, however, those big spenders may well be substituting a true Cead Mile Failte for a well-polished, yet poor imitation of an Irish welcome. 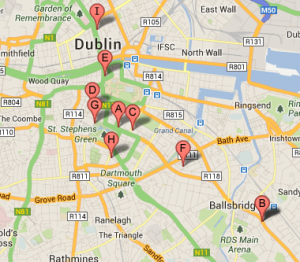 Food services, entertainment, view, room variations such as size and additional amenities, spas and fitness centers, ease of access and location may be considered in establishing a standard. Hotels are independently assessed in traditional systems and rest heavily on the facilities provided. Some consider this disadvantageous to smaller hotels whose quality of accommodation could fall into one class but the lack of an item such as an elevator would prevent it from reaching a higher categorisation.

In recent years hotel rating systems have also been criticised by some who argue that the rating criteria for such systems are overly complex and difficult for laypersons to understand. It has been suggested that the lack of a unified global system for rating hotels may also undermine the usability of such schemes.