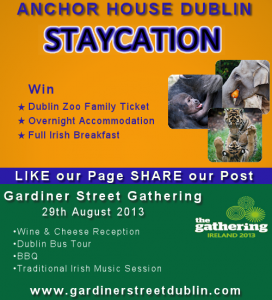 The Gathering Gardiner Street 2013 will be invitation based and will be funded directly by local businesses. 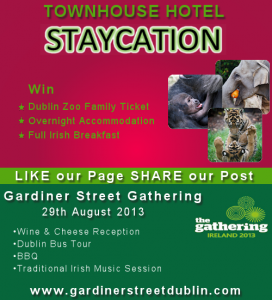 Throughout 2013, Ireland is opening its arms to hundreds of thousands of friends and family from all over the world, calling them home to gatherings in villages, towns and cities.

Communities throughout Ireland are showcasing and sharing the very best of Irish culture, tradition, business, sport, fighting spirit and the uniquely Irish sense of fun.

Over 70 million people worldwide claim Irish ancestry. The Gathering Ireland 2013 provides the perfect excuse to reach out to those who have moved away, their relatives, friends and descendants, and invite them home. 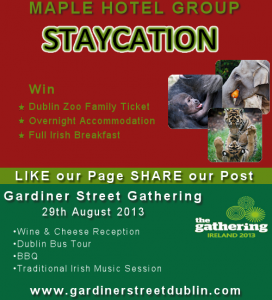 The Gathering is the people’s party. It kicked off in spectacular style at the New Year’s Eve Festival in Dublin and is being celebrated through gatherings of the people and Ireland’s major festivals during 2013. So now it is over to you. It is in your hands. Be part of it.

Tourist numbers to Ireland grew significantly from March to May, with the number of overseas visitors to the State rising by 8.1 per cent on the same period last year.

There were more than 1.7 million visitors to Ireland from overseas during the three months, bringing the total number for the first five months of 2013 to just under 2.5 million. The figures, which are contained in the CSO’s latest quarterly overseas travel report, indicate the best year for tourist numbers in Ireland since 2009.

Minister for Tourism Leo Varadkar said that the figures pointed to the Gathering’s impact on the international tourism market. “As the year progresses, each set of statistics shows that the Gathering is making a difference. Numbers from North America are as good as we’ve ever seen them, while France is leading the charge from Europe”, said Mr Varadkar.

Visitors from North America, where the Gathering is being heavily marketed, showed the most substantial increase, with a rise of 12.6 per cent on the same period last year. The increase brought the total number of visitors from Canada and the US to 282,300.

Visitors from mainland Europe also increased during the three months by 9.6 per cent, to 676,000, with visitors from France and the Benelux countries showing a particular spike in numbers.

Trips from Britain, Ireland’s largest source of visitors, showed some improvement with a rise of 5.6 per cent to 726,300. Visitor numbers from Britain had been falling steadily for the past few years.

Commenting on the figures, Tourism Ireland chief executive Niall Gibbons admitted that the number of British visitors “continued to be challenging”. Mr Gibbons said that slow economic recovery and weak consumer confidence had taken a toll on visits from Britain. However, he added that the overall boost in numbers was an encouraging sign for Irish tourism.

“The Gathering Ireland has certainly played a major role in helping boost visitor numbers in the first five months of the year,” said Mr Gibbons. “We believe that – working closely with our industry partners in 2013 – we can deliver a 5 per cent increase in visitor numbers,” he added.

Tourism Ireland is hoping for the country’s best year yet for American visitors, with over one million trips expected.

Meanwhile, the figures indicate that Irish people are continuing to cut back on foreign travel, with a 0.3 per cent decrease in trips taken by Irish residents overseas from March to May.