Gardiner Street Dublin provides a number of public parks and play areas that are free to visit. These public parks are maintained by Dublin City Council and offer relaxing environments for families, couples or individuals who want to enjoy some quiet time. The parks are free to use and provide an Oasis in which to enjoy your sandwich, read a book or allow the kids to have some fun time that is free to enjoy. 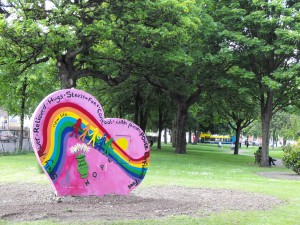 Mountjoy Square is a public space that was built in the Georgian period and it retains much of what would have been enjoyed by Georgian communities, much of the Georgian architecture has been restored and maintained in the square.

St Stephen’s Green (Irish: Faiche Stiabhna) is a city centre public park in Dublin, Ireland. The current landscape of the park was designed by William Sheppard, which officially opened to the public on Tuesday, July 27, 1880. The park is adjacent to one of Dublin’s main shopping streets, Grafton Street, and to a shopping centre named for it, while on its surrounding streets are the offices of a number of public bodies and the city terminus of one of Dublin’s Luas tram lines. It is often informally called Stephen’s Green. At 22 acres (89,000 m2), it is the largest of the parks in Dublin’s main Georgian squares. Others include nearby Merrion Square and Fitzwilliam Square. Phoenix Park is the largest park in Dublin city, but is not in a Georgian square.

The Iveagh Gardens are among the finest and least known of Dublin’s parks and gardens.  They were designed by Ninian Niven, in 1865, as an intermediate design between the ‘French Formal’ and the ‘English Landscape’ styles.  They demonstrated the artistic skills of the landscape Architect of the mid-19th century and display a unique collection of landscape features which include Rustic Grotto’s and Cascade, sunken formal panels of lawn with Fountain Centre Pieces, Wilderness, Woodlands, Maze, Rosarium, American Garden, Archery Grounds, Rockeries and Rooteries.

The conservation and restoration of the Gardens commenced in 1995 and to date most of the features have been restored, for example the Maze in Box hedging with a Sundial as a centrer piece.  The recently restored Cascade and exotic tree ferns all help to create a sense of wonder in the ‘Secret Garden’.  The pre 1860s rose varieties add an extra dimension to the Victorian Rosarium.