Gardiner Street Dublin would play an important part in the greatest literary work of the modern world, James Joyce, celebrated on Blooms Day each year in Dublin Ireland, was the author of Ulysses which was first published back in 1922, it expanded the public’s preconceptions about what was permissible in fiction despite being denounced as obscene and even unreadable by some critics. These days, Joyce’s labyrinthine novel is widely touted as one of the greatest fictional works of the 20th Century. Gardiner Street and its surrounding network of Georgian Streets would feature prominently in this classic and this may be related to the fact that the Jesuit Order which taught Joyce during his school days has its home in Gardiner Street. 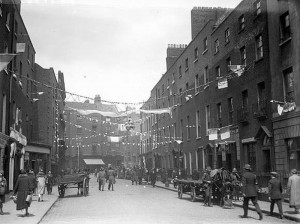 James Augusta Aloysius Joyce (2 February 1882 – 13 January 1941) was an Irish novelist and poet, considered to be one of the most influential writers in the modernist avant-garde of the early 20th century. Joyce is best known for Ulysses (1922), a landmark work in which the episodes of Homer’s Odyssey are paralleled in an array of contrasting literary styles, perhaps most prominent among these the stream of consciousness technique he perfected. Other major works are the short-story collection Dubliners (1914), and the novels A Portrait of the Artist as a Young Man (1916) and Finnegans Wake (1939). His complete oeuvre also includes three books of poetry, a play, occasional journalism, and his published letters. 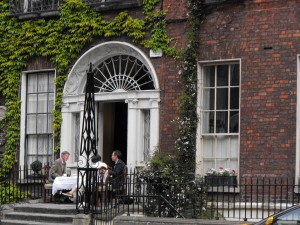 Joyce was born to a middle class family in Dublin, where he excelled as a student at the Jesuit schools Clongowes and Belvedere, then at University College Dublin. In his early twenties he immigrated permanently to continental Europe, living in Trieste, Paris and Zurich. Though most of his adult life was spent abroad, Joyce’s fictional universe does not extend far beyond Dublin, and is populated largely by characters who closely resemble family members, enemies and friends from his time there; Ulysses in particular is set with precision in the streets and alleyways of the city. Shortly after the publication of Ulysses he elucidated this preoccupation somewhat, saying, “For myself, I always write about Dublin, because if I can get to the heart of Dublin I can get to the heart of all the cities of the world. In the particular is contained the universal.

James Augusta Aloysius Joyce was born on 2 February 1882 to John Stanislaus Joyce and Mary Jane “May” Murray in the Dublin suburb of Rathgar. He was baptised in the nearby St. Joseph’s Church in Terenure on 5 February by Rev. John O’Mulloy. His godparents were Philip and Ellen McCann. He was the eldest of ten surviving children; two of his siblings died of typhoid. His father’s family, originally from Fermoy in Cork, had once owned a small salt and lime works. Joyce’s father and paternal grandfather both married into wealthy families, though the family’s purported ancestor, Seán Mór Seoighe (fl. 1680) was a stonemason from Connemara. In 1887, his father was appointed rate collector (i.e., a collector of local property taxes) by Dublin Corporation; the family subsequently moved to the fashionable adjacent small town of Bray 12 miles (19 km) from Dublin. Around this time Joyce was attacked by a dog, which engendered in him a lifelong cynophobia. He also suffered from keraunophobia, as an overly superstitious aunt had described thunderstorms to him as a sign of God’s wrath. He was also a Gaelic football goalkeeper.

In 1891, Joyce wrote a poem, Et Tu Healy on the death of Charles Stewart Parnell. His father was angry at the treatment of Parnell by the Catholic Church and at the resulting failure to secure Home Rule for Ireland. The elder Joyce had the poem printed and even sent a part to the Vatican Library. In November of that same year, John Joyce was entered in Stubbs Gazette (a publisher of bankruptcies) and suspended from work. In 1893, John Joyce was dismissed with a pension, beginning the family’s slide into poverty caused mainly by John’s drinking and general financial mismanagement.

For some readers (okay, me), Calypso is the moment we’ve all been waiting for: the arrival of Leopold Bloom. This is the chapter that really kicks off the novel for me; meeting Bloom makes me feel grounded in something real, and it’s kind of a relief. As in Telemachus, the beginning is marked by an oversized initial letter: the big M, standing parallel to Bloom’s pensive figure, indicates that this is the beginning not only of a new episode but of the second section of the novel, the Wandering. (Since we’re not using an “L” or a “B,” some people have suggested that the “M” might also refer to Bloom’s wife, Molly.)

Joyce’s book may be a retelling of Homer’s epic, but in a lot of ways I read it as a novel about a marriage; we join the world of that marriage when we meet Bloom in his kitchen at 7 Eccles Street. It might also be worth keeping in mind that this is a middle-aged marriage (remember it’s 1904 Dublin, so 30-ish would be considered middle-aged). According to the Chronicles of Leopold and Molly Bloom, the Blooms were married in 1888; when we meet them, Leopold is 38 and Molly is 33. They have a 15-year-old daughter Milly, who is away working as a photographer’s assistant in Mullingar (about 52 miles from Dublin). Bloom is employed as an ad canvasser for a Dublin newspaper called the Freeman’s Journal, and Molly is a singer who is about to embark on a tour.

After Telemachus, Bloom’s world seems a lot different. Bloom’s taste for viscera and the sensual is a very important part of his character. It sets him almost immediately in direct contrast with Stephen Dedalus, who is all mind and can barely be talked into a breakfast of eggs and milk. The distinction between the two characters and their worlds is captured nicely by the images here, too, particularly the play of light and dark. Bloom’s world feels more spacious, lighter.

It doesn’t necessarily seem like the most important thing for readers to learn about our main character–what he likes to have for breakfast–but I think the way Bloom approaches the world “with relish” is something good to know about him right from the start.