They were the most famous power couple in the world, young, beautiful, rich, their faces on the cover of endless magazines, their every move photographed and recorded for an insatiable, besotted public. John Fitzgerald Kennedy, the youngest ever US president, and his wife Jacqueline Bouvier, from powerful and privileged backgrounds – the Branjelinas of their day – shaped American style and became symbols of a changing society and attitudes that were modern, open and progressive. The characters of Dan and Betty Draper in Mad Men, for instance, that so fascinate a new generation, were drawn directly from the Kennedys and that postwar period in America. 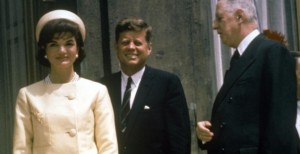 Carefree and confident, the Kennedys had an immediate effect on US taste. JFK popularised the dark two-button suit, the polo shirt, the casual blazer and chinos, a preppy president with an Ivy League air, an aspirational look still copied today by companies like Ralph Lauren and Tommy Hilfiger. Button-down shirts and hats went straight out of fashion because JFK eschewed them and many attribute his cool to his athletic physique, thick shock of hair and broad smile.

“He has the glamour of a matinee idol and his appeal to women is undisputed,” wrote The Irish Times during his presidential campaign. “His good looks, careless elegance and flashing smile could turn out to be his strongest assets.”

His “heiress” wife Jacqueline, playing the part of the compliant and beautiful wife in a developing televisual age, was an even more powerful asset, a major weapon in his already well-stocked armoury. The couple brought culture and glamour to the White House where Jackie put her mark immediately on its social life and interiors. The results, televised in 1962, were viewed by 56 million Americans. The clean-lined simplicity of what she wore, which still resonates today, was not only due to her Gallic taste for impeccable tailoring and fit, but also to good posture and a supple, slim figure toned from years of horsemanship, swimming and disciplined dietary control. It made anything she wore look effortlessly elegant. As first lady, she favoured bright pastel colours and rarely wore black as she was to do years later.

Early pictures of her as a beautiful young debutante already display that sense of languid opulence and well-bred sophistication that remained throughout her life. Everybody wanted to look like Jackie and what she wore could change the fortune of any company, one estimate being that it could rack it up by as much as $14 million. There was little that she didn’t know about fashion and her little pillbox hats, neat skirt suits and A-line dresses worn with unassuming accessories as first lady chimed with her role. She was later to describe such attire as “duty uniform” and “state clothing”.

Despite the look of ease, an enormous amount of work went into her appearance. She was acutely aware of what worked best on her 5’7” frame and could look equally arresting in a strapless evening gown as in a sheath with sandals. Though she loved French haute couture, she championed US designers, in particular the aristocratic émigré Oleg Cassini, who produced more than three hundred ensembles for her. For her official White House portrait, however, she famously wore a pleated linen dress by Irish couturier Sybil Connolly that no doubt contributed to the Irishwoman’s US success.

Though Jackie didn’t accompany JFK to Ireland in 1963 due to pregnancy, her visit in 1967 transfixed the nation. Ostensibly a private one with her children, there was a huge security operation to protect her, although she did make public appearances at the Derby in a pale coat with a Peter Pan collar (that would not look out of date today) and later at a State banquet in Dublin Castle in a ravishing strapless ballgown and glittering jewellery. In 1966 she was voted for the fifth year running as the most admired woman in the world.

She will be forever remembered for the pink boucle suit, a Chanel copy made in New York, worn in Dallas on that fateful morning of the assassination in November 1963 and which though spattered with blood and brains, she refused to change while Lyndon Johnson took the presidential oath of office. (At the request of her daughter Caroline Kennedy, the suit with its matching pillbox hat will not go on display until 2103).

Her dress mirrored the life she led, changing and developing as time went on. The more she was hounded by photographers after her marriage to Aristotle Onassis, the larger her shades. In her latter years working as an editor, she dressed simply in trouser suits with silk blouses and hardly ever wore patterns or prints, the limit being stripes or a light windowpane plaid.

Though forever remembered as a style leader, it was a legacy she spurned. When she came across the following sentence in a book “There was one sphere where Jacqueline had great influence, it was fashion”, she scrawled in the margin “much to her annoyance.”