Dublin 4-16 Kildare 1-09: What initially threatened to be a competitive Leinster football semi-final ended up being Kildare’s heaviest defeat to Dublin since 1897. 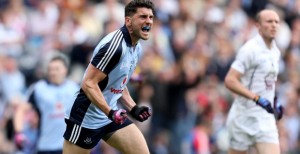 That’s how good Dublin can be when afforded the space that Kieran McGeeney’s defence allowed them.

James McCarthy had belted the butt of Mark Donnellan’s post when allowed stroll through Kildare’s porous defence. That was a let off. And a warning.

The rain had flooded down in the moments before throw in. Dublin players, perhaps wearing the wrong studs, were slipping all over the field. Kildare, via Brophy again, eased into a five-point lead to spark memories of the 2011 meeting when a controversial Bernard Brogan free edged Dublin over the line.

But any chance of this rivalry gaining another important chapter quickly disappeared. Dublin found their stride; Diarmuid Connolly was superb, the vice captain striding through the middle at will as Kildare were far too easily pulled out to the wings.

Connolly found Paul Mannion and that close to goal the Kilmacud Crokes man will rarely if ever miss the target.

Any concern of a close game disintegrated as a brace by Ciaran Kilkenny points and two Stephen Cluxton frees made viewing as boring as a Dublin press conference.

Johnny Doyle was battling away up near Cluxton’s goal but there was no sign that Kildare would trouble Dublin’s 2013 version. The panels have moved in radically different directions since meeting two years ago.

Dublin’s older guard are in their prime, yet clinging on to their positions as a raft of All-Ireland under-21 winning graduates come in search of the next medal on their must have list.

Just before halftime a score by Eoghan O’Flaherty made it a two-point game but Dublin’s reaction was frightening in its intensity.

Doyle was perhaps harshly judged to have fouled Cooper on the sideline underneath the Hogan stand. The free was taken rapidly, with Connolly’s clever link play finding Brogan.

The goal left Kildare with a five-point mountain to climb.

They took an age to return to the field after the break but whatever fire and brimstone McGeeney had concocted in the changing room was quickly extinguished by points from Kilkenny, Cluxton, Ger Brennan and the returning Eoghan O’Gara.

Connolly added a third goal before Jim Gavin gave him a rest, O’Gara scrambling in the fourth in injury time.

Far tougher challenges lie ahead for Dublin as McGeeney continues to rebuild in Kildare.

Meath 0-18 Wexford 0-13: Meath survived a first half spent mainly on the back foot and finished strongly to reach a second successive Leinster football final at Croke Park this afternoon.

A more fluid and impressive attacking display after half-time, featuring accurate place kicking by Michael Newman, who finished with nine frees, and Graham Reilly – four points from play – was sufficient to see off Wexford.

Aidan O’Brien’s side will regret a number of missed chances, both in terms of wides and points unambitiously taken when goals were possibly available, but they weren’t able to stay with Meath when their opponents kicked on.

The match actually swung in the 10 minutes before the break, when Wexford went from leading by four – 0-8 to 0-4 – after a fine point kicked by Brian Malone, to just the minimum advantage – 0-8 to 0-7 – after Ben Brosnan missed a couple of frees in the closing minutes of the half.

Although he converted a free after the break and Malone added another, a run of five unanswered points reversed the direction of the match and pushed Meath ahead.

Wexford battled hard but they never regained the initiative and, sustained by Newman’s frees, Meath kept the scoreboard ticking over for an ultimately convincing win.