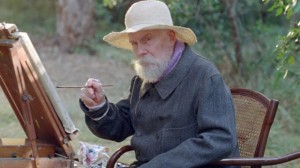 The last time I checked, Pierre-August Renoir was still mildly unfashionable. Regarded as overly accommodating to the chocolate box, the impressionist didn’t seem as home to transcendence as did Manet or Monet. Indeed, it is fair to say that his son Jean, director of La Règle du Jeu and La Grande Illusion, now probably has the more formidable reputation.

This handsome study of Renoir in later years is unlikely to have much effect on the painter’s reputation one way or the other. It’s an attractive piece enhanced by fine performances from all concerned. There are some diverting meditations on the hoary old business of the muse. But director Gilles Bourdos doesn’t do much to explore the dynamics of Renoir’s art. This feels like a film made for the already converted.

Keeping in step with the current fashion, the film-makers wisely focus on a specific period in their subject’s life rather than attempting a hurried sprint through the entire career. (See The Iron Lady for an example of how that approach can backfire.) We are on the French Riviera in the later days of the first World War. Now 74, seriously arthritic, Renoir (Michel Bouquet) spends his time painting still lifes.

A fresh outburst of creativity is, however, triggered when a young woman, Dedée (Christa Théret), strolls into his life. Men being men and painters being painters, Dedée inspires a renewed interest in the nude. When Jean (Vincent Rottiers) returns from the war, he begins assisting his father and ultimately ends up in a relationship with the young woman.

Bourdos has stated that he wanted to examine “a woman who provides the bridge between painting and cinema”. It’s an interesting notion, but Renoir never really gets to grips with either medium. What we have, rather, is a fairly safe, sunny holiday in somebody else’s decrepitude. You would need a soul of potash not to savour the delicious fauna and flattering southern light. But the film never gets far beyond the decorative.

Which, come to think of it, is what the non-believers used to say about Renoir…