We are delighted to welcome the One Direction boys to Croke Park in May 2014. 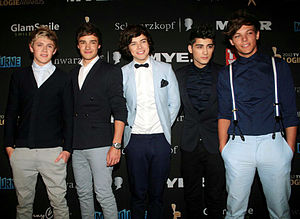 The world’s biggest pop band today announced the venues and dates of their upcoming “Where we are” stadium tour in 2014. It was confirmed that the boys will play in Croke Park on the 24th May 2014. This will be the first time that Westmeath’s Niall Horan will return to the place where his One Direction journey began at the Dublin auditions.

One Direction are an English-Irish pop boy band based in London, consisting of members Niall Horan, Zayn Malik, Liam Payne, Harry Styles, and Louis Tomlinson. They signed with Simon Cowell’s record label Syco Records after being formed and finishing third in the seventh series of British television singing competition The X Factor in 2010. Propelled to international success by the power of social media, their two albums Up All Night and Take Me Home, released in 2011 and 2012 respectively, broke several records, topped the charts of most major markets, and generated hit singles, including “What Makes You Beautiful” and “Live While We’re Young”.
Often described as sparking the resurgence in the boy band concept, and of forming part of a new “British Invasion” in the United States, the group have sold over 14 million singles and 8 million albums, according to the band’s management company, Modest! Management. Their achievements include two BRIT Awards and three MTV Video Music Awards. According to Nick Gatfield, the chairman and chief executive of Sony Music Entertainment UK, One Direction represented a $50 million business empire by June 2012. They were proclaimed 2012′s “Top New Artist” by Billboard, while The Huffington Post named 2012 “The Year of One Direction”.
This entry was posted in One Direction Croke Park 2014 and tagged One Direction Croke Park 2014. Bookmark the permalink.