Posted on 2 August 2013 by Lord Gardiner

Paddywagon Tours Moving and shaking up the tourist trade

The Boss: Charlie O’Connell’s Paddywagon Tours located at the bottom of Gardiner Street now handles 90,000 visitors and he’s on course to expand his brand internationally.

Paddy says: ‘I escorted the Ulster Rose in the 1993 Rose of Tralee festival and she was quite tricky but we got on well at the end. At the beginning she was going to tell the organisers I wasn’t a good enough dancer and look to have me replaced.”

Cathal “Charlie” O’Connell, Paddywagon Tours founder has come a long way in the 20 years since then. Not only did he get asked back to be an escort at the festival two more times, he built up a successful tour operator business, which currently handles 90,000 visitors a year. 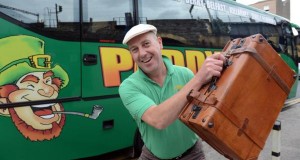 Paddy now has a portfolio of seven hostels, four bed and breakfast, B&Bs and a number of serviced apartments, none of which he bought at the height of the boom, as well as 40 buses that criss-cross the country on a daily basis offering tours of Blarney Castle, the Ring of Kerry, the Cliffs of Moher and other tourist sites.

Paddywagon also runs five tourist offices and entering the hotel market is his next big move.

Paddy says: “The business was originally aimed at backpackers. We quickly found out there were a finite number of backpackers and many of the other markets were being poorly served. A lot of people were coming to us who were more senior who wanted to use Paddywagon’s services.”

Paddywagon as a result of customer queries, evolved into doing tours with private groups, groups of American families and mothers and daughters on holiday together.

Paddy says: “The buses started to have older denominations on them which didn’t suit the younger crowd. You’d have Mary who is 75 from Alabama and came here to hear about macushla and then you’d have some young Aussies who came here to drink. So I had to divide it up into private tours and tours for people of older ages. Seventy per cent of our business now has nothing to do with backpackers.”

Paddywagon in 2011, set up an online booking site for day tours in cities across the globe, after discovering a huge proportion of tour activity and excursion providers in places like New York and Sydney did not have a website, web presence or online booking facility.

Paddywagon quickly found more and more people were becoming obsessed with packing a huge number of activities and experiences into short stays abroad, but providers of those experiences were often hard to find, as they had a near invisible presence on the internet.

Paddywagon website, DayToursWorld, offers more than 15,000 different tours and activities such as ghost hunting in Prague, a gang tour of New York, cooking in Cappadocia and a Bondi surf experience in Sydney.

Paddywagon used business savvy and in order to keep the costs of setting up the website as low as possible, O’Connell began offering visitors to Ireland free accommodation in return for a few hours’ work.

Paddy says: “Cruise ships were coming into Ireland two-a-penny and all the money for tours was being taken by the cruise company, as they were selling the tours aboard the ships. People on cruise ships started getting tech savvy and searching for tours online at cities the ships were docking in. We managed to get in on the forums and get chatting to the customers and today we are carrying 600 passengers off a cruise ship that has docked in Cork.”

Paddy O’Connell, has since changed his outlook, saying that while the elation of success is “amazing”, he has learnt more from his failures than the successes.

Quote: “I would hate to be one of those people who knows only victory and not defeat.”

Paddywagon moving forward: While his businesses might have not all succeeded, he remains quick to spot an opportunity. In 2010, he jumped on the Icelandic volcanic ash bandwagon, by dispatching buses to Europe to rescue stranded Irish people from places such as Paris, Barcelona and Milan.

The next move for Paddy O’Connell is to tackle the UK market, and is in the process of putting in place 10 buses in London to do tours to Stonehenge and other tourist sites.

Paddy says: “We have nearly reached our maturity level in the Irish market. We are going to open shops in Leister Square and we are going to draw them in. It won’t be Paddywagon, it will be English style. “A bit of Jolly Roger and Paddington bear”.

Paddy concludes: “I’ve built a national brand, but now I want to make it an international brand. I want to multiply this business by five times over the next few years.”