Plans for the redevelopment of Dublin’s Parnell Square and the provision of a cultural quarter there including a new city library and cultural centre have been unveiled. 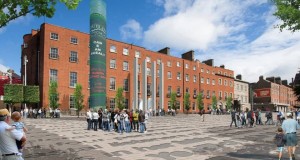 The proposed development has been termed possibly “the most important cultural development in Dublin for 100 years,” by City Architect Ali Grehan.

Consultation on the €60 million scheme is now invited by Dublin City Council, the Office of Public Works and Kennedy Wilson, a US real estate investment company, which has its main European office in Dublin.

Key to the plans are the relocation of the city library to a new development incorporated into Colaiste Mhuire and the upgrading of other notable Georgian buildings on the north side of the square to make what its advocates call an “intercultural district”.

Included in the plans are a civic plaza and a largely pedestrianised section of Parnell Square linking the library and existing Hugh Lane gallery and Writers’ Museum more closely with the Garden of Remembrance.

The plans were publicised in Dublin yesterday by Lord Mayor Naoise Ó Muirí along with City manager John Tierney and City Librarian Margaret Hayes. Joining them was Peter Collins from Kennedy Wilson, which is providing the € 2.5 million seed capital on a philanthropic basis.

The existing city library at the nearby Ilac centre, opened in 1986, is deemed to be used well beyond its capacity and is not of a stature to match the needs of Dublin or its role as a Unesco City of Literature.

The new library, a striking circular design, will act as a focal point for greater civic involvement in literature and the arts generally. It will incorporate an innovation and enterprise hub, a story house, music centre and a digital library.

The new-look Parnell Square will consolidate what planners term the city’s Civic Spine which will run eventually from Dublin Institute of Technology at Grangegorman on the north side, through the square and along O’Connell Street towards College Green, Christchurch and, eventually, to the Irish Museum of Modern Art at Kilmainham.

It is hoped that greater reaches of central Dublin will be regenerated by investment in this Civic Spine and that further improvements will be kick-started along its course.

Mr Collins confirmed Kennedy Wilson’s optimism for Ireland’s economic future. “We are firmly of the belief that the Irish economy will recover over the medium term and we believe that Dublin, as the capital city, will be the driver and the beneficiary of that recovery. To that end we have invested over €200 million in commercial and residential projects.”

He pointed to an historical parallel in that the Rotunda Hospital, also on Parnell Square, was initially funded by private donations while the Hugh Lane Gallery owed much to the private generosity of Sir Hugh Lane.

As city librarian, Ms Hayes said the new library would be predicated on the notion that it would act as a “cultural broker where other entities come in” such as theatres, innovation centres and other facilities.

“This will be an investment in the people,” she said.

Consultation is now open and the scheme’s design team hopes the redeveloped square will be opened by Christmas 2017.

Parnell Square (Irish: Cearnóg Parnell) is an important Georgian square sited at the northern end of O’Connell Street, and west of Mountjoy Square, in the city of Dublin, Ireland.

In the south easterly corner of the square, where it meets with O’Connell Street, is sited the Gate Theatre, and the Ambassador and Pillar Room venues. Entertainments were originally developed here as part of the Rotunda Hospital scheme by Bartholomew Mosse as a revenue engine to pay for the running of what was Europe’s first lying-in maternity hospital. Extensive pleasure gardens, subsequently forming the body of the square, were located to the rear of the hospital in the original development.

The Hugh Lane Gallery is on the north side of the square. It was erected in cut stone by Lord Charlemont to a design by William Chambers during the Georgian period. On this side also is the Dublin Writers Museum and the Irish Writers’ Centre. The striking Gothic Revival Findlater’s Church (Abbey Presbyterian Church) just up from the gallery on the same side was erected in the 1860s by Alexander Findlater, at his own expense, and which he presented to the Presbyterian congregation. The James Joyce Centre is located nearby on North Great Georges Street, a street notably rich for its Georgian houses as is the nearby and historic Mountjoy Square. One of Dublin’s most acclaimed restaurants, Chapter One, is located on the northern side of Parnell Square between the Hugh Lane Gallery and the Writers Museum. On the south side of the square is Conway’s bar, outside of which Pearse surrendered to the British army after the 1916 Easter Rising. The political party Sinn Féin has its Dublin head office and shop on the western side of the square. The western side also is known for offices of a number of trade unions and other organisations. Also on the western side is the St. Martin’s Apostolate office, which includes a small basement chapel. The St. Martin’s Apostolate office is well known in Dublin for its moving crib that is open to the public each Christmas.

Famous historic residents and events No 5 – Birthplace of Oliver St John Gogarty (1878–1957); writer, surgeon, and senator. A friend of Michael Collins and the writers WB Yeats and James Joyce, Gogarty was unwillingly immortalized as Buck Mulligan in the Ulysses story by Joyce.

No 9 Cavendish Row – Dr Bartholomew Mosse (1713–1759); Philanthropist and surgeon. Mosse lived here, having originally hailed from Portlaoise. He founded the Rotunda Hospital, located in the square and which was built to designs of Richard Cassels between 1751 and 1757. The emergence of Parnell Square as a square is largely attributable to the pleasure gardens him as he laid out pleasure gardens in order to pay for the hospital.

No 25 Parnell Square, Gaelic League Building. This building is of great significance during the period surrounding the War of Independence as it was here on September 9, 1914 that a meeting held by Supreme Council of the Irish Republican Brotherhood (IRB) with selected others agreed to rise up against the British before the Great War, subsequently known as the First World War, would be finished: In attendance were Eamonn Ceannt, Thomas Clarke, James Connolly, Arthur Griffith, John McBride, Sean MacDermott, Sean McGarry, William “Bill” O’Brien, Seán T. O’Kelly, Padraig Pearse, Joseph Plunkett.

No 41 Parnell Square – this building was formerly the Irish National Forester’s Hall. Prior to 1916 it was used for drilling both by the Irish Republican Brotherhood (IRB) and the Volunteers; on the eve of the outbreak of the Easter Rising Éamon de Valera assembled the 3rd Battalion here. In 1922, subsequent to the Treaty and prior to the Civil War, the IRB again met here in a failed attempt at achieving consensus on the Treaty; among the attendees were Michael Collins, Harry Boland, Liam Lynch and Eoin O’Duffy – all of whom, with the exception of O’Duffy, were dead by the end of the Irish Civil War.

No 46 Parnell Square – Formerly the Headquarters of Conradh na Gaeilge, the Irish language league, this was the venue where Thomas MacDonagh assembled the 2nd Battalion the Sunday night on the eve of the 1916 Easter Rising. In August 1917, the meetings that led to the National Executive of the Irish Republican Army being established were also here, with persons present including Éamon de Valera, Thomas Ashe, Cathal Brugha, and Michael Collins. Subsequently on September 19, 1919, in the company of Richard Mulcahy, Michael Collins set up his famous “Squad”, composed of top-level operatives – men who would ultimately be involved with highest priority missions, such as the elimination of the British “G Men” agents in 1920.