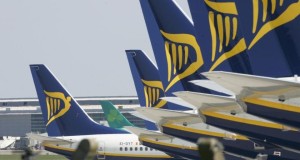 People can say what they like about Ryanair, be that good bad or indifferent, the reality is that Ryanair is popular as it is meeting customer needs.

Growth was dampened by rising unit costs, which increased by 8 per cent on the back of an 18 per cent (€292 million) increase in fuel. Fuel costs now represent 45 per cent of total costs for the airline.

However, despite grounding up to 80 winter aircraft, passenger traffic grew by 5 per cent, with some 79.3 million passengers in the year to March 31st, 2013, up from 75.8 million the previous year. The airline’s balance sheet remains in a strong position, with gross cash of over € 3.5 billion and year-end net cash of € 61 million.

Although Ryanair has opened seven new bases this year – Chania (Greece), Eindhoven (Netherlands), Fez (Morocco), Krakow (Poland), Maastricht (Netherlands), Marrakech (Morocco) & Zadar (Croatia) – the airline expects that traffic growth will be more modest this summer, at about 2 per cent. However, the second half of the year may make up for this.

“By grounding fewer aircraft next winter we expect to deliver slightly faster H2 monthly growth which should result in overall traffic growth for the full year rising by more than 2 million to 81.5 million passengers,” chief executive Michael O’Leary said.

During the year, Ryanair overcame both Alitalia and LOT to become the largest airline in both Italy and Poland, respectively, and it is forecasting growth into the future.

“Ryanair believes that its unique low cost advantage will enable the airline to achieve a 20 per cent share of the European short-haul market over the next five years, particularly given that many of Europe’s high fare incumbents are restructuring and cutting capacity,” Mr O’Leary said.

The airline said it is in “active discussions” with both the new owners of Stansted Airport and the new management at Dublin Airport, and if a competitive cost base emerges, it could “restart growth” at these airports as early as September of this year.

On the airline’s failed takeover bid for Aer Lingus, Mr O’Leary said that Ryanair was “disappointed” with the European Commission’s rejection of its third offer.

“It is bizarre that the EU can wave through BA’s offer for British Midland in Phase 1 with few remedies, yet months later reject Ryanair’s offer for Aer Lingus which was accompanied by a revolutionary remedies package delivering two upfront buyers to open competing bases in Dublin and Cork airports,” Mr O’Leary said, adding that it was “yet another politically motivated decision”.

Of its order of some 175 new aircraft, the airline indicated that having reached “acceptable pricing” with Boeing, it expects delivery from 2014 to 2018, subject to approval at the egm on June 18th.

Looking ahead, in the year to March 31st, 2014, the airline expects traffic to grow by 3 per cent to 81.5 million, with an expected rise in costs due to rising oil prices, a 3 per cent growth in sector length, and “unjustified” higher Eurocontrol and Spanish airport charges. It is targeting profits in the range of between € 570 million and € 600 million.