As the sun rises on the Boyne Valley at 6am, a mist covers the Boyne Valley like a carpet of cotton candy.  In fields surrounding the sleepy village of Slane, thousands of rock fans, young and some young at heart crawl from designer tents, some massage stiffened necks as they slept in the cars in which they arrived. High barriers surround the fortified Slane Castle grounds, not to keep out invading foreign kings as in the past, but to keep order among the 60,000 rock invaders who will arrive in Slane today to pay homage to the Kings of Rock, Bon Jovi. Some of those gathered at this early hour are barely one-third the age of the Rock legends to whom they will pay homage, however, Slane is as much about the event as it is about the performers. 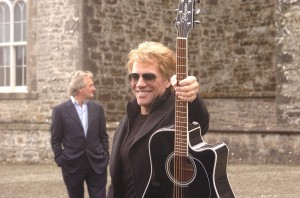 Slane Castle is no longer viewed as a fortification in the chess game among European Kings; it is now part of an indigenous landscape that provides much needed employment in an area heavily hit by the economic-downturn. Much of the local youth have left this picturesque landscape and moved to places as far away as Australia to find work, however, today I have already meet with groups of Australians who have travelled to Slane to watch their Rock legends perform. The fertile ground of the Boyne Valley may be soaked following heavy over-night rain; however, the air is filled with Rock toxic expectation of a great day ahead.

People travelling to the Bon Jovi concert in Slane today have been advised that there are new parking arrangements this year.

Roads in and out of the Co Meath village will be closed from 7am this morning.

The main advice from gardaí is to use public transport where possible and people taking their own cars should follow the car park signs.

Any parked cars causing an obstruction along the roads leading into Slane will be towed away.

Any cars coming from Dublin will have to travel on the M1 or M3.

Gates opened at 3pm with the first band, Ham Sandwich, taking the stage at 3.30pm.

They will be followed by Bressie and The Coronas, with Bon Jovi expected on stage at around 7.30pm.

The weather forecast is for sunny spells and showers. Organisers are advising people to dress appropriately.