Visitors to Ireland from overseas have increased by 5.4% from January to the end of June 2013. This year could see the highest number of tourists from America in many years. Irish Americans have been mobilised by the idea of The Gathering 2013 which encourages those with Irish connections to come back to Ireland and trace their family history and enjoy some quality time with family and friends. 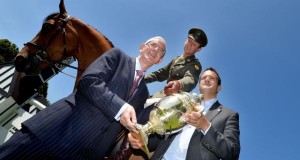 Between January and the end of June 2013, the number of people visiting Ireland increased by 5.4 per cent per cent with tourists from north America up by over 15 per cent, according to the Central Statistics Office and this figure is reflected in the higher number of Hotel and Guesthouse Bookings.

The CSO figures coupled with other data show that a total of 3,144,800 people visited Ireland between January and June this year, compared with 2,982,400 for the same period last year, if this growth continues to the end of 2013 it could be Ireland’s biggest tourist influx since the economic downturn began.

A statistical analysis of the figures show visits by people between April and June from other European countries, not including the UK, increased 4.9 per cent while visitors from countries outside of Europe and North America increased by 5.9 per cent.

The UK tourist market which is one of Ireland’s strongest imports has seen visits by British tourists fell by 1.1 per cent from April and June compared to last year, down from 735,200 to 726,900.

A significant growth in the number of North American tourists from April and June was noted and grew from 305,700 to 350,800, compared to last year, with north America having the largest concentration of Irish Americans.

Irish people are still taking foreign holidays and the number of Irish people going abroad between April and June is also up by 1.4 per cent to 1,752,400.

The Gathering has been supported by Minister for Transport Leo Varadkar and he said the statistics for the first half of the Gathering year were “very positive”. “So far, it looks like the initiative is persuading people to visit Ireland”.

Tourism Ireland is impressed with the latest tourism figures:

“In 2013, we hope to welcome over one million American visitors, spending about $1 billion,” said Chief Executive, Niall Gibbons. Plans by Aer Lingus to begin flights from San Francisco and Toronto all year should help boost visitor numbers again next year, he added.

Tourism Ireland also admitted that, “Great Britain continues to be challenging” because of the “the pace of economic recovery and weak consumer confidence”.