Trim Castle is a famous Irish Castle that is an important part of Irish Tourism, Tourism Ireland promote such historic sites and that helps make it a key tourist attraction, Day Tours from Dublin to Trim Castle can be enjoyed on a daily basis.

When you stay in Dublin, it is easy to visit historical sites in other neighbouring counties, for example, the world famous Trim Castle, Newgrange and Hill of Tara are only a short bus journey from Dublin City. Spend a day visiting the many fantastic sites in County Meath and be back in Dublin in time to enjoy an evening of entertainment in one of our Traditional Irish Pubs. 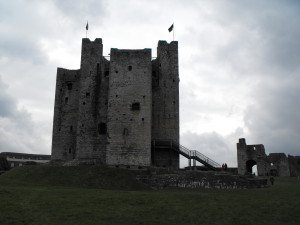 It is difficult to comprehend the historical and architectural importance of Trim Castle without a personal visit. Trim Castle is a fantastic location for a day trip if you are staying in Dublin, both Trim Castle and Trim Town are welcoming places. The Castle tour is informative both for the amateur historian and the curious visitor. The size of the remaining Trim Castle structure can only be appreciated close up, the underground tunnel that runs to the Boyne River and was used to bring stores up the Boyne to the Castle inhabitants is really fascinating. It is easy to use your imagination to fill in the gaps left by fallen structure, is easy to be transported back in time and understand how important Trim Castle was in bygone days.

Trim Castle (Irish: Caisleán Bhaile Atha Troim) is a Norman castle located on the south bank of the River Boyne in Trim, County Meath, Ireland. With an area of 30,000 m², it is the largest Cambro-Norman castle in Ireland. Over a period of 30 years, it was built by Hugh de Lacy, Lord of Meath and his son Walter.

Trim Castle and the Normans

The Castle was used as a centre of Norman administration for the Liberty of Meath, one of the new administrative areas of Ireland created by Henry II of England and granted to Hugh de Lacy. De Lacy took possession of it in 1172. De Lacy built a huge ringwork castle defended by a stout double palisade and external ditch on top of the hill. There may also have been further defences around the cliffs fringing the high ground. Part of a stone footed timber gatehouse lies beneath the present stone gate at the west side of the castle. The ringwork was attacked and burnt by forces of the Gaelic High King of Ireland, Ruaidrí Ua Conchobair but De Lacy immediately rebuilt it in 1173. His son Walter continued rebuilding and the castle was completed c. 1224. The next phase of the castle’s construction took place at the end of the 13th century, and the beginning of the 14th century. A new great hall with undercroft and attached solar in a radically altered curtain tower, a new forebuilding, and stables were added to the keep. On Walter’s death in 1241 his granddaughter Mathilda (‘Maud’) inherited the castle. Her second husband was Geoffrey de Geneville, Lord of Vaucouleurs in France. Mathilda died in 1304, and Geoffrey entered the priory at St. Mary’s in Trim. His son had died in 1292 and the estate passed to his oldest daughter, Joan. In 1301, Joan married Roger Mortimer and the castle passed to the Mortimer family who held it until 1425, when the line died out. The estate passed to Richard of York, who was killed at the Battle of Wakefield in 1460. In 1461, Richard’s son, Edward IV, appointed Germyn Lynch of London to be his representative at Trim. 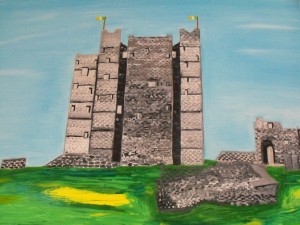 The castle site was chosen because it is on raised ground, overlooking a fording point over the River Boyne. The area was an important early medieval ecclesiastical and royal site, and although the site is about 25 miles from the Irish Sea, it was accessible in medieval times by boat up the River Boyne. Trim Castle is referred to in the Norman poem “The Song of Dermot and the Earl”.

During the late Middle Ages, Trim Castle was the centre of administration for Meath and marked the outer northern boundary of The Pale. In the 16th and 17th centuries it had declined in importance, except as a potentially important military site, and the castle was allowed to deteriorate. During the 15th century the Irish Parliament met in Trim Castle seven times and a mint operated in the castle. It fell into decline in the 16th century but was refortified during the Cromwellian wars in the 1640s.

After the wars of the 1680s, the castle was granted to the Wellesley family who held it until Arthur Wellesley (the Duke of Wellington), sold it to the Leslies. In following years it passed via the Encumbered Estates Court into the hands of the Dunsany Plunketts. They left the lands open and from time to time allowed various uses, with part of the Castle Field rented by the Town Council as a municipal dump for some years, and a small meeting hall for the Royal British Legion erected. The Dunsanys held the Castle and surrounds until 1993, when after years of discussion, Lord Dunsany sold the land and buildings to the State, retaining only river access and fishing rights.

The Office of Public Works began a major programme of conservation and exploratory works, costing over six million euro, including partial restoration of the moat and the installation of a protective roof. The castle was re-opened to the public in 2000.

Trim Castle is the largest Norman castle in Ireland.

The Dublin Gate barbican tower at the southern curtain wall

Trim and Talbot Castles. Also visible are the Royal Mint, solar and Trim Cathedral with an area of 30,000 m², Trim Castle is the largest Cambro-Norman castle in Ireland. The design of the central three-story keep (also known as a donjon or great tower) is unique for a Norman keep being of cruciform shape, with twenty corners. It was built on the site of the pevious large ring work fortification in at least three stages, initially by Hugh de Lacy (c. 1174) and then in 1196 and 1201–5 by Walter de Lacy. Part of the interior of the castle was archaeologically excavated by David Sweetman of OPW in the 1970s and more extensively by Alan Hayden in the 1990s.

The surviving curtain walls are predominantly of three phases. The west and north sides of the enciente are defended by rectangular towers (including the Trim Gate) dating to the 1170s, the Dublin gate was erected in the 1190s or early part of the 13th century and the remaining wall to the south with its round towers dates to the first two decades of the 13th century. There are two main gates into the castle. The one in the west side dates to the 1170s and sits on top of s a demolished wooden gateway. The upper stories of the stone tower were altered to a semi-octagonal shape, c. 1200. A single round towered gate with an external barbican tower lies in the south wall and is known as the Dublin Gate. It dates from the 1190s or early 13th century and was the first of its type to be constructed in Ireland.

Apart from the keep, the main extant structures consist of the following: an early 14th century three towered fore work defending the keep entrance and including stables within it and which was accessed by a stone causeway crossing the partly filled-in ditch of the earlier ringwork; a huge late 13th-century three aisled great hall with an under croft beneath its east end opening via a water gate to the river; a stout defensive tower turned into a solar in the late 13th century at the northern angle of the castle; a smaller aisled hall added to the east end of the great hall in the 14th or 15th century; a building (possibly the mint) added to the east end of the latter hall; two 15th- or 16th-century stone buildings added inside the town gatehouse, 17th-century buildings added to the end of the hall range and to the north side of the keep and a series of lime kilns, one dating from the late 12th century the remainder from the 18th and 19th centuries.

Trim Castle is open, on payment of an entry fee, to the public every day from Easter Saturday to Halloween (October 31) from 10am. The area inside the castle walls is freely accessible for an admittance fee, while access to the Castle keep is via a 45-minute guided tour. In winter, the complex is open only on weekends and bank holidays.