Posted on 1 September 2013 by Lord Gardiner

On the face of it today’s sold-out GAA All-Ireland semi-final is an uncomfortable one for Dublin, even before a ball is kicked. The county hasn’t thrived as favourites in championship matches against Kerry but then again the situation only arises about once in a generation so it’s hard to deduce any trends. 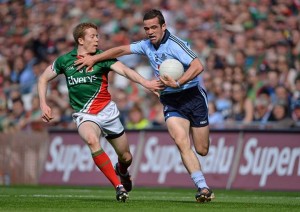 Kerry v Dublin: Beyond the generalisations though, the outcome gets more blurred. There’s a reason counties like Kerry or Kilkenny’s hurlers have such good records as underdogs. For sides that are favoured in the vast preponderance of their fixtures, being spared the pressure of that expectation is a relief. 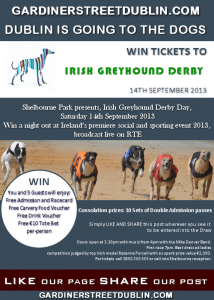 In front of massive Mayo support, making up the majority of the 65,345 Croke Park attendance, James Horan’s team out-scored Tyrone 1-10 to six points in the second half, the pace and capacity of their game improving considerably after what had been a very nervous start.

The Munster champions’ All-Ireland quarter-final was not illuminating. They were nailed-on favourites, ground out the result in the first half and subsequently lost interest.

When Eamonn Fitzmaurice’s team knew they were going to be up against it, against Cork, they started in great form and put themselves in a strong position before losing the initiative as the contest retracted into a more recognisable meeting between the old rivals.

Cork provide the basis for a form line between the counties. Dublin’s win in the last round was more thorough than Kerry’s in that the Leinster champions squandered the opportunity to put themselves out of sight but didn’t allow Cork back into contention to the extent that happened in Killarney.

Dublin have been pushed marginally harder and trailed at half-time against Meath before pulling away after the break but they also maintained decent form throughout the spring and won the league title. Yet they’ve had their moments. In the two league matches against Tyrone, Jim Gavin’s team looked at times wobbly, losing one and responding well to win the final late on.

He question is: Can Kerry replicate the defensive detail that Tyrone brought to bear? Probably not, as they’re not likely to drop extra men back and complicate matters for Dublin’s attack. They will fiercely contest the middle third to prevent attacking build-up becoming too precise and to make life hard on the restarts.

Kerry Manager, Jack O’Connor, under which Kerry GAA has seen Kerry enjoy great success mopping up Stephen Cluxton’s kick-outs and Meath showed in the Leinster final that all it takes is concentration and getting tight on any defenders who are shaping up as receivers of the ball.

Two years ago Anthony Maher and Bryan Sheehan were well in control once the ball started to travel farther but the Dublin centrefield had their best outing of the year in the quarter-final against Cork and will have a slight advantage in pace against Maher and Johnny Buckley.

There’s been much talk about pace in general and Dublin’s advantage in that respect but the elephant in the room is the poverty of the team’s conversion rate, which against Kildare hit a ratio of 11:1. It has served them to date but can that continue at this altitude?

Bernard Brogan is believed to be nearly back to his best and there were only fractions in the measure of some of his misses but, for all of his work and bravery in presenting for ball, his career has been about consistent seasons rather than ones in which form mysteriously comes and goes.

Generally, Dublin would do well to look at Mayo and how the purpose of their attacks is to get the ball to the man best placed to score rather than as occasionally looks to be the case with the Leinster champions, pass only when you feel you absolutely can’t do anything yourself.

Kerry on the other hand have a well-configured attack with the collective performance of Darran and Declan O’Sullivan and James O’Donoghue causing havoc in the Munster final with their running and interchange. For all the talk about getting Colm Cooper onto the inside line his use of the ball from the 40 can wreak havoc in disorganised defences and his support runs are lethal.

Dublin have resisted the use of a sweeper to date but they will need to pay greater attention to the need to cover the middle than happened against Meath when Ger Brennan was left exposed in situations that, if repeated this time, Cooper and Kerry will remorselessly exploit.

With a defence largely made up of young man markers directed by the Ó Sé brothers, Kerry will give this a serious rattle and the story of the semi-final will be determined by how Dublin respond.

Although they have yet to hit top gear, Dublin have established a rhythm over six months now and have lost just once in 13 matches.

They have a powerful bench and room to improve. This will be their biggest test of the championship thus far and they can survive.