Often Dublin Hotels are seen as sterile, impersonal, standalone businesses, operating with a purely for profit motivation, however, on the 29th of August 2013 a unique Gathering Event in Gardiner Street Dublin, placed a new emphasis on cooperation, sharing and hospitality. That Gathering Event was presented by Gardiner Street Accommodation Cooperative, a group of professional accommodation vendors that have learned that the old ways are still best. 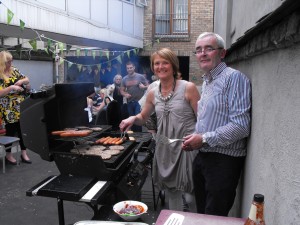 Rarely, has such cooperation been witnessed between Dublin Hotels, Guesthouses and Bed and Breakfast providers, while this was a very professionally planned and laid out affair, the reality was, that this event was conceived, created and presented by very ordinary hardworking people, who have endured much over these past years in order to sustain and grow their businesses.

The Gardiner Street Gathering Event began with a wine and cheese reception at The Townhouse in Gardiner Street, those gathered were given a tour of the artefacts relating to the famous Georgian residents who once graced the fine rooms of The Townhouse. These famous residents included Dion Boucicault (pronounced Boo-seek-O) who lived in this house in the 1830s (the house was built about 1808). He was a flamboyant character by any standards. Immensely famous and wealthy (he made £500,000 on one play alone) at the peak of his career. He married three times and died broke. He wrote more than 150 plays – as well as acting and directing many of them.

Mr Lafcadio Hearn…or better known to his Japanese friends as Koizumi Yakumo, was born of Irish-Greek parentage in 1850, on the Ionian Island of Lefkas and lived at The Townhouse.

Then it was 4pm and time for the first of two FREE Dublin City Bus Tours of the day, accommodation vendors, staff, international guests, local dignitaries and ordinary local people enjoyed a tour that may often be obscured from them due to the demands of the normal working week. People were clearly excited to see old and new Dublin, now meshed together in an architectural collage unique to this historic city.

BBQ at The Anchor House

The Anchor House Guesthouse is one of Dublin’s finest boutique guesthouses and it would be here that guests returned from the first of two Dublin City Tours of the day to enjoy fresh BBQ food, cool drinks and other delicacies. The Anchor House Guest House has been owned and operated by the husband and wife team that are Gerry and Joan Coyne for the past 20 years, and they supported by a friendly and helpful staff.

Up until the 1960s Guinness was transported by horse and cart along Gardiner Street to the Guinness barges at Custom House Quay, it was right throughout this history that urban legend would have it, that some barrels of Guinness may well have fallen of the back of the cart, and made its way to the basements of many fine Georgian Houses where merriment only akin to the scenes from the epic Film Titanic, when Leonardo DiCaprio as Jack Dawson and Kate Winslet as Rose DeWitt Bukater joined the ordinary folk on the lower decks, were played out.

It is in this tradition of good beer, personal service and a true Cead Mile Failte that Ned Keenan’s Traditional Irish Bar is born.

What has been proven by the efforts of professional accommodation vendors in Gardiner Street Dublin is that a spirit of cooperation can achieve much more than any individual or business working in isolation. The Gardiner Street Accommodation Cooperative has shown that the old ways can still work in a city that is often viewed as being grossly commercial and lacking heart and soul.

While Hotels, Guesthouses and Bed and Breakfasts in Gardiner Street Dublin continue to compete against each other in terms of presenting their own individual products and services, they have learned that cooperating in terms of promoting their area and their city can bring economic and marketing benefits never before imagined by many who have fought hard through the blizzard of economic recession to keep the wolves from the door and the open fire burning.