Full-time! Celtic beat Liverpool 1-0 in the ‘Dublin Decider’ thanks to a first half Amido Balde goal. Liverpool had a goal disallowed through Kolo Toure early in the second-half. However, it was to be Celtic’s day in a truly entertaining clash.

Sea of Red, Valley of Green

Never the likes, has been seen

These armies, stood in uniform proud

From the bunkers, their heroes did appear

Under a blue sky, and D4 sun

The Celtic giants, stood in their glory

The Field of Dreams, was never so true

What professionals, what a crew

This was a friendly, and that’s for sure

Love for football, comradeship so pure

Shoulder to shoulder, the Red and Green

From the greatest movie, no greater scene

Toure disallowed, what a glorious name

Thank you for coming, north, south east and west

As football fans, you are the best

LIVERPOOL AND CELTIC have confirmed a pre-season friendly will take place between the two sides at the Aviva Stadium on August 10.

In addition, Celtic manager Neil Lennon was in Dublin this afternoon (4/6/2013) to give a press conference in relation to the fixture. 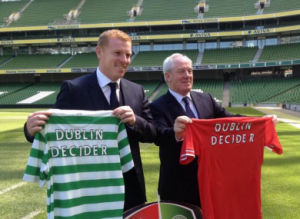 It is understood that tickets will be available to buy from this Wednesday. It will be the first time the sides have met since their 2002/03 UEFA Cup encounter, which Celtic ultimately won 3-1 on aggregate.

Celtic will play Liverpool at Aviva Stadium on the 10th of August 2013, this will be an historic occasion as both Celtic and Liverpool has long established links to Irish Fans. Dublin Hotels and Dublin Guesthouses will be buzzing with excited fans and Aviva Stadium regulars. Accommodation near Aviva Stadium will enjoy a harvest of guests who will enjoy some of the best Hotels and Guesthouses in Dublin. Dublin Bars and Restaurants will serve up local produce and high quality meats to ensure that the Celtic and Liverpool teams and their fans are set for a great game of Aviva Football as well as a weekend of summer festival activity.

Celtic Football Club has a long and illustrious history, having always competed in the highest level of football in Scotland, currently the Scottish Premier League. The club was constituted in 1887, and played its first game in 1888. Celtic play home games at Celtic Park, which is the largest football stadium in Scotland. In 2005–06, Celtic’s home games attracted an average attendance of 58,149, making Celtic third only to Manchester United and Arsenal in average attendance for any football club in the UK.

In 1967, Celtic became the first British team to win the European Cup, which had previously been the preserve of Italian, Portuguese and Spanish clubs. Celtic remain the only Scottish club ever to have reached the final, and are one of only two clubs to have won the trophy with a team composed entirely of players from the club’s home country; all of the players in the side were born within 30 miles of Celtic Park in Glasgow.

Liverpool F.C. was founded after an internal dispute within Everton F.C. The dispute was between the Everton F.C. committee and brewer John Houlding, the landholder of the Anfield ground and president of Everton F.C.

The Everton committee viewed Tory councillor Houlding as having a personal financial and political agenda. There was a sharp conflict on the business model of how the club was run. Relations were cold once the Everton committee saw Houldings intentions and moves.

Anfield was owned by Houlding one year after Everton moved in. Houlding bought the land from landowner Orrell. Everton initially made a donation to a local hospital in lieu of rent. After one year they were paying rent to their own president. Mr Orrell owned the adjacent land. Houlding had sole lucrative selling rights on all refreshments at the ground.

The largely Methodist based politically Liberal leaning Everton F.C. committee were uneasy with this, especially the potential selling of alcohol. This would take revenue away from the club. Houlding also increased the rent from £100 to £250 per year, after Everton came 2nd in the second Football League season, 1890. Everton offered a compromise of £180. An international match was hosted, England vs. Ireland indicating the quality of Anfield at the time. The rent was not a major issue as the club’s profits were substantial. However, from paying a small contribution to a local hospital, Everton five years later was paying £250, a substantial sum in those days.

The first leg of Celtic’s Champions League qualifier will take place in Belfast after agreeing to a request from Cliftonville.

The opening tie of the second qualifying round was initially set to be played at Celtic Park before the Northern Ireland champions requested a swap.

The first leg will now take place at Solitude on July 17th, with the return in Glasgow on July 23rd, both with a 7.45pm kick-off.

Boss Neil Lennon told the club’s website: “It will be the first time I will have taken Celtic to a competitive game back home so that is something to look forward to, but we will be totally motivated, obviously, to play as strongly as we can and try and win the tie.

“It’s a great draw and it will create a lot of interest back in Belfast but I am very wary of the tie.”