Posted on 9 September 2013 by Lord Gardiner

Before 81,651 GAA spectators at Croke Park on Sunday 8th September 2013, Clare corner-back Domhnall O’Donovan surged forward in injury-time to score his first ever point in a Clare jersey. All square. Come back and do it again in three weeks. 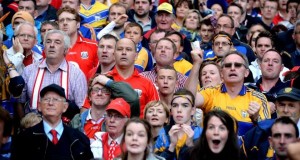 Clare Manager, Davy Fitzgerald said, “It was everything we had worked for, our dreams were on the line, the only time we were behind in the whole feckin’ game. I mean, I could not believe it, that we were behind. Because I didn’t think we deserved to be. And when he got it . . . hats off to him.”

Clare didn’t deserve to be behind. They’d been the better side throughout and Cork’s only lead of the day came when Patrick Horgan nipped them ahead in the 70th minute.

Clare hurlers fought a titanic battle and It would have been desperately cruel on Clare to have lost out on the back of it. However, Clare’s inability to plunder any goals was what kept Cork in the game. Every time they looked to stretch clear, Jimmy Barry-Murphy’s side pulled them back.

The goals in the second-half came from Conor Lehane, Anthony Nash and Pa Cronin meant that Cork were running with appreciably longer strides than Clare and they were almost enough to steal JBM’s team an All-Ireland against the head.

The replay is set for Saturday, September 28th, almost certainly at 5pm, which will make it the first All-Ireland final to be played under lights. As with last year, the GAA have cut ticket prices for the game – stand tickets down to €50 and terrace tickets down to €25.