Posted on 13 September 2013 by Lord Gardiner

Eoin Reddan not distracted by Heineken Cup issues ahead of Pro12 clash against Ospreys. Scrumhalf focused on challenge from Welsh side for Leinster’s first competitive home game. 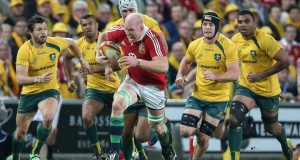 The prospects of the Heineken Cup, and its very existence beyond this season, may be the dominant topic of the week elsewhere but not, according to Eoin Reddan, within the Leinster squad. Aside from not wanting to contemplate a doomsday scenario, being in the dark there’s little light they can shed on the subject; besides which there’s the minor matter of hosting their bug bear of recent times, the Ospreys, in their first competitive home game of the season on Saturday evening.

Recommended Accommodation for the RDS:

Outside of the derbies, this is as big as it gets, and in essence is what the Rabo Pro12 is all about. Hence, Reddan looked was somewhat askance about all the talk of the Heineken Cup yesterday. “I was thinking, ‘here we are, we’re playing probably outside of the home games the biggest game of the year’. As it happens it’s come into us very early on so no one really is ready for it, except for people in both camps I imagine, and they’ve been humdingers.

“Those games don’t finish. You literally have to be playing until people have gone home in the stands. Literally, these games go on and on and on, and I’ll remember the Ospreys game, the final we played here, for the rest of my career as easily one of the toughest games I’ve played. I’d say the ball was in play for longer than any other game that year.

“So it is going to be tough, physically, for both teams, especially for this time of the year. Neither team gives up so hopefully it’s going to be a bit of a spectacle.”

Ironically, although Rhys Priestland ranks higher in the Welsh pecking order than Dan Biggar, the former hardly made an impression last week when Leinster overcame a sluggish start with an impressive bonus-point win away to the wilting Scarlets. By contrast, Biggar has been a regular thorn in Leinster and Irish sides.

“I think he might have had a falling out with Gats or something by the looks of things,” quipped Reddan, “because he has played very well for Wales, he’s been a thorn in our side, even with Ireland. But there’s probably not much between them. They’re both very good players so that probably makes it a less obvious thing, but he’s certainly been very dangerous to us, he’s a very tough player to play against. He changes his game up well, he’s got a varied kicking game, so we know what to expect but we’ll have to be on our game big time.”

Assistant coach Jonno Gibbes confirmed the 67-times capped ex-Wallaby winger Lote Tuqiri has arrived in Dublin but will not feature this weekend as he awaits a work permit. Luke Fitzgerald was likely to be in the frame but this game might come too soon for Fergus McFadden (hamstring) while Michael Bent’s nerve problem in his neck is likely to sideline him for another three weeks.

Gibbes’ brother Chris is a newly-appointed assistant coach with the Ospreys, adding to the siblings regret that they have also been drawn against each other in the same Heineken Cup pool, with the sides thus due to meet again in Swansea four weeks’ hence in their group opener.

As for the elephant in the room, and as a former Wasps player, Reddan could understand some of the arguments emanating, although he made the valid point that it would scarcely constitute a European competition if all six nations weren’t involved, adding: “Currently they (the Italians and Scottish) are not the best teams in it but in 10 years, you never know.”

“It’s not been a massive topic, if I’m being honest,” admitted Reddan. “It’s played out in the media all the time so it’s not something anyone is adding new information to at lunch . . . there’s nothing new coming to us except what everyone is reading.

“Would I be afraid of Irish players leaving if there was no more Heineken Cup? I suppose if another competition became the premier competition that we weren’t a part of that would be a risk for us. But at the moment you’d be hoping there will be another Heineken Cup and to be honest with you I can’t see a world without the Heineken Cup, and I don’t really want to think about it too much.

However, the imminent priority is the Ospreys. “Me and Jono come in here probably talking about the Ospreys for the last three hours and worried about what plays we are going to use so,” said Reddan. “Taking a step back, it (the Heineken Cup row) is a big deal and we are very aware it is in our environment. But if we take our eye off the ball and the small details then our fans won’t be happy at the weekend either. I think we have to deliver at the weekend, not just for ourselves but for everyone are paying into the game as well.”