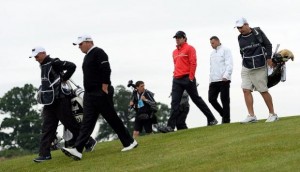 Golf News: Snap-shot: Irish Open: Graeme McDowell one under after five holes, his playing partner, Padraig Harrington is one over following two bogeys and a birdie. The third member of the group, defending champion, Jamie Donaldson is one under…

Ireland – Made for Golf

Seeing so many Irish Stars in the professional golfing arena got us thinking…. How do you create a breeding ground for a world-class golfer? It’s a much sought-after secret recipe but we have proof that Ireland has all the ingredients… Just consider the following.

Paul McGinley – Europe’s 2014 Ryder Cup Captain.  What a moment that was when he sank the winning putt at the 2002 Ryder Cup. The good-humoured golfer also represented Europe in 2004 and 2006, and became the first European golfer to win in every one of his three appearances. Not bad for a former Gaelic football player who only started concentrating on golf at the Grange Golf Club, in the foothills of the Dublin Mountains, at the age of 18 after he suffered a broken knee cap.

Rory McIlroy, who counts his home course as Hollywood, Co Down, is currently the world’s number one golfer and has won two majors. He was just 22 when he won his first – the 2011 US Open – setting a record score of 16 under-par. Next was the 2012 PGA Championship which he won by a record eight shots.

Of course McIlroy is following in the footsteps of other great golfers from this island. Padraig Harrington, who plays at Stackstown in Dublin, has a cool three majors to his name.

And who can forget Shane Lowry’s play-off victory over Robert Rock, while still an amateur, at the 2009 Irish Open? The Offaly man turned professional soon after.

Graeme McDowell, AKA G-Mac, whose home course is Rathmore Golf Club in Portrush, Co Antrim, had one of the most momentous years of any golfer in the Tiger Woods era, bar Tiger of course. In 2010, G-Mac won a number of high-profile events, most notably the US Open. He was the first European to win it in 40 years.

Darren Clarke also won a major in 2011, taking home The Open Championship trophy. This achievement came after 54 attempts over a 20-year period. The hours of practice as a young boy at Dungannon Golf Club had finally paid off.

Plain and simple Ireland is flush with golfing talent. And why wouldn’t it be when you consider that there are more than 400 links and parkland courses dotted all over the island – and with our benign climate it’s a rare day when you can’t play.

Why sit on the edge of your couch at 3am watching the world’s top golfers when you could be on the edge of the same fairways as these superstars, breathing the same air as them and feeling the tension as they take crucial make-or-break shots?

At the 2012 Irish Open, three of the four then current major champions played at Royal Portrush. PGA champion Keegan Bradley lined out alongside US Open champion Rory McIlroy and Open winner Darren Clarke.

And to whet your appetite for the 2013 Irish Open, why not check out Golf Ireland’s “Greening in the Years” video here.