Meath heritage is written into Meath History with many Tourist attractions mapped out, there are many Tourist information centres in Meath such as at Newgrange one of many historical sites, historical graveyards, round towers, to be found in County Meath.

When you stay in Dublin, it is easy to visit historical sites in other neighbouring counties, for example, the world famous Newgrange and Hill of Tara are only a short bus journey from Dublin City. Spend a day visiting the many fantastic sites in County Meath and be back in Dublin in time to enjoy an evening of entertainment in one of our Traditional Irish Pubs. This article deals with the less well known, yet equally important, Donaghmore Church and Round Tower just outside Navan, in County Meath (a 40 minute journey from Dublin). 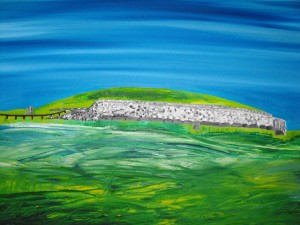 The Church and Roundtower at Donaghmore in Meath is one of the finest examples of the many remaining Round Towers in Ireland. This Tower is situated in County Meath (The Royal County). It is called the Royal County as many of Irelands Clan/Tribal leaders lived in Meath over the centuries, Newgrange and the Hill of Tara and many other historical sites in Meath can be traced directly to ancient Kings and leaders in Ireland. 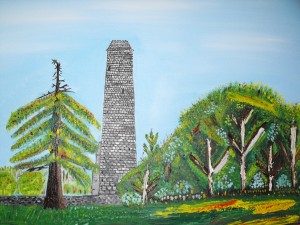 The Donaghmore Church and Round Tower are situated outside Navan in County Meath, and both are maintained by the Office of Public Works. If it were not for the efforts of the OPW many beautiful buildings such as this Round Tower would be lost to the wilderness, this historical and spiritual site is at its most glorious at Dawn. It is in the early hours as the morning dew evaporates to the pulsating beat of the piercing sunrays that the souls of our forefathers rest easy. As the morning mist lifts across the Boyne Valley it unveils the beauty of time, the sounds of history are punctuated by the piercing call of the many wild birds of prey that still dominate the skies over the Royal County.

Here in Ireland there is fossil evidence of an interaction between man and the goshawk. Remains were found in Mount Sandel in Colerainec-7,000 BC, Newgrange in the Boyne Valley in Co. Meath -2,000 BC and Dalkey Ireland in Dublin – 3,000 BC. The earliest known reference to falconry in Ireland is in the Irish text ‘The Life of St. Colman’ in the 12th century. In this, the King of Tara is described as having ‘da seabhac seiga’ or two hunting hawks.

It was on this Donaghmore site that a Monastery was founded in the 5th Century by Saint Patrick, the Patron Saint of Ireland. You may have heard of St Patrick due to the world wide celebration by Irish people of St Patrick on the 17th March each year.

Ireland’s Saint Patrick placed the Church at Donaghmore into the care of Saint Cassan. St Cassan’s body is venerated here. The Round Tower was not built until the 11th or 12th Century. It is well preserved, but its upper part was badly restored in 1841. The Four windows which normally face north, south, east and west from the top of the round towers are not found here. And the stone at the top of its roof is missing. 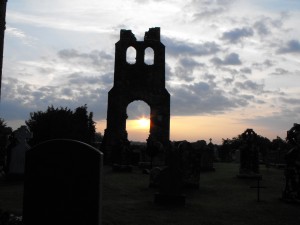 Originally the Tower had wooden floors which were connected by ladders. The door way which is placed at height above the ground level, dates from the 12th Century but it might not be original. It has carved surround with a crucifixion, with strangely twisted legs on the key stone, and a head facing outward from each of the jambs.

Next to the Tower are the remains of a small 16th century Church. County Meath is rich in heritage and culture. Meath is famous around the world for its historic sites, this Round Tower and Church would be less well known compared to New Grange and so forth. 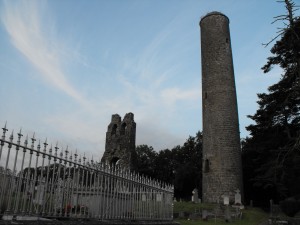 There is no charge to visit this site. There is free car parking at this site of the Round Tower and Church. And if you feel like a good walk it is only a few minutes from Navan Town which is the capital of County Meath.