John Calder, The Theology of Samuel Beckett and The Garden of Eros

The Theology of Samuel Beckett and The Garden of Eros

John Calder has written The Theology of Samuel Beckett and the Garden of Eros. France has a capital city, Paris, and Paris changes less than other major cities. The meeting places where intellectuals find themselves may change, from Montmartre to Montparnasse, from Saint-Germain-des-Près to eastern Paris and some of the suburbs where life is cheaper and the arts encouraged and even financially assisted. However, people still go back to the old haunts, restaurants and cafes like the Dôme, the Select and the Falstaff, and even the more touristy venues such as the Deux Magots and the Flore, and the Right Bank’s well-known restaurants such as Fouquet’s, not to mention the grand hotels where English is more commonly heard than any other language. 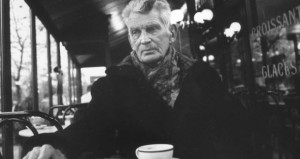 He continues, I have spent a lot of time in Paris, first as a young publisher looking for authors, later as a resident, but I always made a point of becoming a friend of the writers I took on, and spending time with them in cafes and over meals. Some I came to translate from other languages, primarily French, but some were exiles writing in English. One such writer, who became a very close friend from the time I met him in 1955 up to his death in 1989, was Samuel Beckett.

In 1928 Beckett first went to Paris to teach, where he fell in with the Joyce Irish circle, and where he returned frequently to try to write, much to the despair of his well-to-do Protestant business family in Dublin, who could not understand why their academically brilliant son would not settle down to a conventional job, but preferred to be penniless in bohemian Paris, writing novels that no one was interested in reading.

Samuel Beckett preferred to spend the second World War with his friends in wartime Paris rather than in neutral Ireland, and there he took part in the underground resistance, was wanted by the Gestapo, which had arrested most of his friends, and spent most of the war hiding in the Vaucluse mountains in the south, working on his third book. It was not published until well after the war, after his later novels, written in French, had given him a small, but limited recognition. It was only after the worldwide success of his play Waiting for Godot, first performed in 1953, that he was able to make a living, and by that time his long-suffering parents were both dead.

Beckett was above all else, a total pessimist, obsessed by the many horrors of world events and especially by man’s cruelty to man and even to animals, Beckett had a negative attitude to our short lives on this planet and our attraction to wars, killing and cruelty and tendency to dominate others. He once said that he had nothing against happiness, but personally had no talent for it.

The writer continues, Walking along the Boulevard du Montparnasse one day, I commented that it was a fine day. He looked at the sky and replied “So far”. When at a cricket match with Harold Hobson, the theatre critic, who had observed, “On a day like this, it makes you glad to be alive”, his reply was, “I wouldn’t go so far as that.”

Life’s simple pleasures, such as meeting friends and a good meal with grilled sole and white wine in restaurants such as Aux Îles Marquises on the rue de la Gaité, were about the only pleasures that Beckett allowed himself.

The publisher says of Beckett, When I first knew Beckett, and some years before I published his non-dramatic work, I would often spend whole nights with him in cafes, playing chess and sipping beer. He would talk about Joyce and other favourite authors and other subjects that interested us both, but never about his own work, which he handed over without comment, often expecting me not to like it, but I always did.

Paris provided a retreat: We would walk around Paris and eat at his favourite haunts, some of them now gone or changed in character. The Coupole stayed open most of the night then and many large groups of friends would meet there, talking almost to breakfast time. But things are different now and the Coupole has become mainly a tourist trap that closes comparatively early. Situated on the main street of Montparnasse, it is surrounded by every variety of eating place, small theatres and boutiques.

John Calder says, Beckett lived not far away, in later years preferring to meet visitors in a conventional hotel across the Boulevard St Jacques, the PLM, rather than inviting them to his sixth-floor apartment. He would arrive punctually at his appointed time and leave exactly when he had decided to leave. Many of Irish photographer John Minihan’s now famous photographs of Beckett were taken there (see photograph, above).

John Calder says, Anecdotes about him mainly concern his extreme generosity. When waiting for his passport to be renewed at the Irish Embassy one day, he ran into two tourists who were penniless, having been mugged. Beckett emptied his pockets to let them go out to eat and was consequently unable to pay for his passport or a bus home. On another occasion, after being accosted by two Irish labourers in Paris who had lost their way, he walked them back to their hotel and then, as they had no idea what to do, took them out for a good dinner and then, most uncharacteristically, to a nightclub, leaving them at the hotel again at four in the morning. When questioned in Dublin, knowing only their benefactor’s name, they were surprised to be told that he was a famous writer of extreme modesty.

Irish Whiskey, Jameson, was his staple drink and he was always brought bottles by visitors when he was in the old people’s home on the rue Rémy Dumoncel in the 14th arrondissement, where he spent his final months. When asked how to spell a word one day, I realised that he had nothing to read and thereafter I brought him books and dictionaries. Having been born at Easter, on the day of the crucifixion, he died at Christmas in 1989, giving an emphasis to his favourite line in Godot, that one is born “astride of a grave”.

However, in spite of his negative attitude and all the strivings of our consumer society to make us look at life positively, Beckett’s work constantly grows in popularity and, paradoxically, one always feels better coming out of a Beckett performance or reading a prose work.

In his new book John Calder’s The Theology of Samuel Beckett he looks into his complex thoughts about the religion he grew up with, which played a major role when he was nursing his dying mother and are the daring roots of his late semi-biblical writing. Beckett thought about religion all his life and it is a constant background to all of his work, but in an often astonishing way.

Samuel Beckett both Irish and French

Samuel Beckett is claimed by both France and Ireland, to such an extent that when Mary Robinson was invited to lunch by the French president, they argued over his nationality and had to send for an academic to solve the problem.

France’s capital, Paris, is suffering from the same economic downturn as most of Europe but, as during the war and the German occupation, it affects ordinary life very little. The French are great survivors and although spending money might be less and there is much protest at unemployment, longer working hours and pension reductions, life goes on as usual with meetings in cafes, much exchange of ideas and political discussion, and visits to theatres, movie-houses, concert halls and operas continuing as normal. Paris is well-served in every branch of culture and every museum has waiting queues, sometimes hours long, for entry.

It is fair to say that bookshops in English-speaking countries have almost entirely disappeared because of the abandonment of price maintenance, France is protected by a law passed by Jack Lang, who understood the needs of literature and bookshops in particular.

Bookshops cannot stock a wide range of books for different readers unless they can make enough on bestsellers to enable them to also display slow-selling ones intended for a more intellectual readership. French law limits discounts to 5 per cent.

Alas, this means English-language bookshops have a hard struggle and depend on customer loyalty, which has led to closure of all the bookshops selling English books except one, and the obvious tourist ones. The Village Voice, a meeting place for book-lovers for 35 years, closed down last summer, leaving only Shakespeare and Company, which is ideally situated on the Paris riverside and is un-missable by visitors of every variety. Once a second-hand shambles, it is now run by the founder’s daughter, Sylvia Whitman, who has modernised it and brought in much order.

France’s famous Paris has suffered from the same eccentric weather as most of Europe this year, but life goes on as normal and the city remains a draw for food- and pleasure-seekers, with endless exhibitions, performances and historic attractions. With the holiday season approaching, it will close most of its shops until la rentrée brings it back to life in September.

The insightful John Calder’s The Theology of Samuel Beckett and The Garden of Eros – The Story of the Paris Expatriates and the Post-war Literary Scene have just been published.