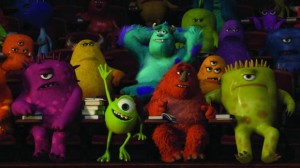 Bringing all that is good about animation and film together, and when spherical green monster Mike Wazowski (Billy Crystal) meets professional child scarer Frank McCay on a school tour of the Monsters Inc factory, the outsized, discoloured golf-ball’s mind is made up: he wants to be a scarer when he grows up.

Many years later, Mike enrolls at Monsters University, where he meets the dweebish Randall (Steve Buscemi) and an arrogant jackass called James “Sulley” Sullivan (John Goodman). As the trailer and tagline informs us, the besties weren’t always thus.

The truth is, it’s the cocksure Sulley who lands hardworking academic Mike in trouble with tough-nut tutor Dean Hardscrabble (Helen Mirren), terrified that his lifelong dream is about to slip through his fingers, diligent student Mike teams up with the least cool fraternity on campus in order to impress the authorities.

Strange watching the third Pixar sequel in four years. When John Lasseter became the chief creative force at Disney Animation in 2006, he promised that the days of Cinderella 3 and Bambi 2 were over at the House of Mouse. It’s unfortunate that the Pixar head honcho has signed off on such unlovely follow-ons as Cars 2. It’s doubly unfortunate that he directed the damned thing himself and greenlit a third, spin-off instalment (Planes is already winging its way toward your local multiplex).

The triangulation of unfortunate comes when one considers the timing. Toy Story 3’s appearance in 2010 seemed to end the winning streak that gifted us WALL-E and Up, Pixar’s finest films to date.

Thank goodness, Monsters University is no Cars 2 travesty. Harking back to Mike and Scully’s time as campus frenemies, this light-hearted prequel may lack the emotional clout of Monsters Inc, but it’s fun and never feels as crassly merchandise- minded as the Cars movies. Technological advances ensure that the empty digital expanses of the 2001 original are now lively and populated. The humour is gentle and all-ages appropriate. The switch of focus to Crystal’s character proves a shrewd way of sidestepping Life Without Boo.