Posted on 4 September 2013 by Lord Gardiner

Almost a €1 billion was wiped off the value of Ryanair shares this morning after the airline issued a surprise profit warning, citing a slump in bookings as a result of the heat-wave. 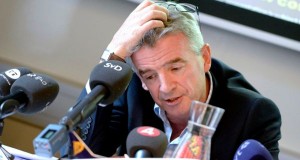 The airline said its full- year profit would be at the lower end of its forecast range of €570 million to €600 million.

This sent shares tumbling by 14 per cent or 94 cents to €5.82, their biggest fall in more than two years.

The carrier said full-year profit may be lower than forecast after a heatwave across Europe trimmed bookings.

“If yields, a measure of fare prices, continue to weaken, profit may end up “at or slightly below the lower end of this range,” it said.

“In recent weeks we have noticed a perceptible dip in forward fares and yields into September, October and November,” chief executive Michael O’Leary said.

This had been impacted by increased price competition and increased capacity in the UK, Scandinavia, Spain and Ireland, he said.

The airline said weak economic conditions in Europe and a weaker sterling were also having an impact.

“This is a surprise statement from Ryanair and comes contrary to some of the commentary from the peer group and indeed Ryanair’s own commentary at its June investor days,” said Donal O’Neill, analyst with Goodbody stockbrokers. “The stock and sector will likely sell off heavily on the back of this news.”

Ryanair will respond to weak forward bookings by cutting its capacity for the year to 81 million seats from 81.5 and by introducing “aggressive seat sales” particularly in the UK, Scandinavia, Spain and Ireland, the airline said.

It made no reference to recent media reports questioning the airline’s safety record.