Bono and The Edge brought something special to Dublin Hotels when they bought The Clarence Hotel with property visionary Paddy McKillen. Hotels and guesthouses in Dublin rarely step off the beaten track in their own respective Star Rated genre, however, The Clarence under the ownership of Paddy and the lads brought a new dimension to Hotels in Dublin, and they delivered a fabulous, world class boutique style hotel that can cater for everyone from the ordinary man on the street to the high flying executive. Anyone can walk in off the street and enjoy the beautiful space created by Paddy and the lads.

Yet, the imagination and vision of Bono, The Edge and Paddy McKillen is not matched by the frayed white-collars of Dublin City Council bureaucracy, why is it that decisions about creativity and innovation is left in the hands of the least imaginative and innovative people in the country. This bureaucracy is made up of people who could not survive in the harsh realities of the free market but choose to hide in the shadows of a job for life with a pension to death tied in. It is time that planning struck a balance between aesthetic pleasure and municipal reality, this will only be achieved when planning decisions such as that under consideration with The Clarence Hotel are look at in the round, in terms of their aesthetic pleasure for international and national visitors to the city as well as their municipal function, in terms of how they will impact on the local area and its services.

Bono and The Edge Fight back

The Clarence Hotel owners, U2 band-mates Bono and The Edge are fighting back against a Dublin City Council decision that blocked their plans for a flying saucer-style roof for the Clarence Hotel in Dublin.

Partnership was the ethos behind The Clarence Hotel, and that partnership includes the rock stars of U2 fame and developer Paddy McKillen, all now taking High Court action against Dublin City Council for refusing to extend planning permission for a €150 million revamp of the Clarence Hotel Dublinwhich sits along the Liffey River.

Clarence Hotel redevelopment was designed by British ‘starchitect’ Norman Foster, involved demolition of most of the hotel and some adjoining buildings on the Quays retaining just their facades, and constructing a much larger hotel around a dramatic atrium and topped by a flying saucer-style roof, called the ‘skycatcher’. The plan was granted permission by the council in 2007 and was appealed to An Bord Pleanála, which approved the council’s decision in 2008. But the economic crisis intervened and the scheme was never built.

In 2013 the partnership applied to the council to extend its planning permission. However, the council refused the extension under the new Dublin City Development Plan.

Clarence Hotel Dublin owned by Bono and The Edge of U2 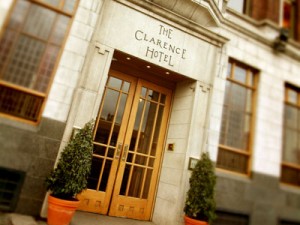 The Clarence is tastefully presented, with attention to detail being a priority for its famed owners. In-room facilities include a fully interactive TV and entertainment system, high-speed broadband, two-line telephones and voice-mail. The Clarence also hosts a fitness room, massage treatment rooms; 24 hours residents lounge known as ‘The Study’, the internationally famed ‘Tea Room Restaurant’ and the much talked about ‘Octagon Bar’. The Clarence in keeping with the traits associated with its owners, offers a high standard of professionalism that is both personal and rewarding. BOOK

The Clarence, Dublin’s premier boutique hotel, offers guests a selection of bedrooms and Suites for you to choose from. These range from our standard category, Superior Rooms, to the spectacular Penthouse Suite.

Each of the hotel’s rooms and suites, no two of which are alike, are decorated in a palette of rich cardinal colours, inspired by ecclesiastical raiment: crimson, royal blue, amethyst, gold & chocolate. The sumptuous colours are carried through in dyed-to-match cotton velvet drapes, carpets, leather chairs and upholstered headboards. The rich colour scheme is played off against the simplicity of the Shaker-style oak furniture and crisp white linens to create accommodations that are comfortable and refined.

Each item of furnishing has been custom-designed and crafted primarily by Irish artisans, including the super king-sized beds, the wrought-iron bedside lamps inset with hand-rolled stained glass, the elegant nickel-plated desk lamps and the candle sconces with coloured-glass diffusers.

Whichever bedroom or suite is chosen guests will enjoy fantastic service from our friendly, professional & attentive staff, adding to your overall experience at one of the top boutique hotels Dublin has to offer.

Gardiner Street Dublin has sown the seed of many music legends, Bono and U2 often practiced in the SFX Hall at the site of Gardiner Street Church before they flowered on the world stage.

One of only a few bands to achieve consistent commercial and critical success across three decades, U2 has charted success on its own terms on both the artistic and business sides of the music industry. From the band’s earliest days in Dublin, Ireland, to the present, U2 has broken free from the traditional limitations of what a rock band — and rock music — could and couldn’t do. By combining an original sound with honest lyrics and a challenging social message, U2 has earned the respect of their peers and critics, and an almost fanatical following of fans around the world. This is their story.

U2 formed in Dublin in the fall of 1976 after 14-year-old Larry Mullen, Jr. posted a note on the bulletin board at his high school seeking musicians for a new band. From the group of hopefuls that showed up at Mullen’s home that first day, a five-piece known originally as “Feedback” formed with Mullen (born October 31, 1961) on drums, Adam Clayton (born March 13, 1960) on bass, Paul Hewson (later nicknamed “Bono Vox” and eventually just “Bono”, born May 10, 1960) on vocals, and Dave Evans (later nicknamed “The Edge”, born August 8, 1961) on guitar. Dave’s brother, Dick, also played guitar for a while, but left Feedback very early on to join another Dublin band, the Virgin Prunes.

Feedback quickly changed their name to “The Hype,” and began rehearsing on weekends and after school as often as possible, forming genuine friendships and developing an undeniable chemistry in the process. After nearly 18 months of rehearsing, the band’s big break came at a talent show in Limerick, Ireland, in March, 1978. With CBS Records’ Jackie Hayden judging, U2 (they had just changed their name again) won the contest, earning a £500 prize and studio time to record their first demo.