Ulster GAA Final 2013 in Clones, County Monaghan, Donegall gaa will take on Monaghan gaa in a fixture whose result could produce an all Ireland Final 2013 team.

Today Clones in County Monaghan will play host to yet another thrilling Ulster GAA Final, Clones is the traditional home to great GAA Ulster fixtures and in particular Ulster Finals, todays could give a real clue to one of this years All Ireland finalists. 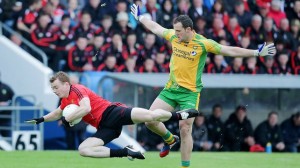 While Dublin are being tipped as favourites for this years All Ireland Final, it may well be that an Ulster team may be a force yet undiscovered.

Monaghan and Donegal last meet in an Ulster Final in 1979 and that was an epic battle. While they did meet in a qualifier in the County Tyrone town of Omagh in 2007, the stronger Monaghan side won over by 2.12 to 1.07.

Monaghan have always been hard workers, with many great GAA names making their mark, Dessie Mone, Vinny Corey, Owen Lennon, Dick Clerkin, Paul Finlay, Tommy Freeman and many more, we can be certain that Monaghan will get stuck into this encounter with the passion and fury that they so often display.

The difference between the Donegal team of 1979 and 2007 is that Donegal are All Ireland Champions right now and that title gives them a fighting edge, however, if they under-estimate Monaghan, it could all come undone.

No longer is the GAA about solo-runs and big kicks, and this is certainly true of the Donegal team under the stewardship of Jim McGuinness, who has built up a team of incredible athletes, who manoeuvre on the pitch like pieces on a chess board, this Donegal team have no intention of being put in check-mate position, McGuinness has developed systems and templates that leave old style thinking in the past, that is not a criticism of old style play, simply a recognition of the needs of the modern game. McGuinness and Rory Gallagher like army generals, use tactics and startegies that they keep close to their chest until the battle begins to unfold.

They jealously guard their hard-won possession and are blessed with an inside trio of McFadden, Murphy and McBrearty who generally reward their outfield colleagues with match-winning tallies.

Indeed, in their two outings this summer against Tyrone and Down this trio have accounted for 79% of all Donegal’s scores.

It’s stating the obvious, but Monaghan’s task is twofold on today: restrict the supply to Donegal’s inside line and sustain a disciplined, tight-marking regime for the game’s duration.

In their games with Cavan and Antrim, Monaghan had a total of nine cards brandished against them, one of which was red. Not to be outdone, Donegal have incurred the wrath of the referee on six occasions.

I think there is a likelihood that Sunday’s encounter, due to what is at stake and given the certainty that both teams will place a big premium on defence, will test the patience of the match officials.

Both camps, I’d imagine, have addressed this and I think that the team that can best retain its composure in the heat of battle is the one that will ultimately prevail.

For a number of Monaghan players, the occasion probably represents their final opportunity to win a much sought after provincial medal.

Guys like Dessie Mone, Vinny Corey, Owen Lennon, Dick Clerkin, Paul Finlay and Tommy Freeman have rendered exceptional service for the cause for a long stretch of time.

In defeat, their talents shone brightly and their gifts are worthy of being adorned with a winners’ medal.

In a recent challenge match against Mayo (one of those top-secret, behind closed doors games beloved of managers), the Farney County narrowly prevailed after a feisty encounter.

By all accounts they adopted an effective defensive system and counter-attacked with purpose, using the class of Conor McManus as their primary scoring threat.

A great deal will depend on McManus’s ability to deal with the snarling presence of the McGees and the considerable defensive support cast that Donegal regularly deploy.

Clones today will be a cauldron. Calmness will be needed.

Donegal can write another page of history by winning their first ever three-in-a-row in the province.

As All-Ireland champions they have the class and pedigree to achieve this.