For decades Guinness World Records have captured the imagination of people from around the world, those extraordinary days when Roy Castles would present ‘Record Breakers’ to an audience of heart stopping moments.

Ireland has always had record breakers, and Irish Dancers have always set records around the world, Riverdance broke the mould with its long running performances in theatres all around the world. Riverdance reignited a world interest in Irish culture, the modernising of traditional tunes and dance steps put Irish culture back on the map. 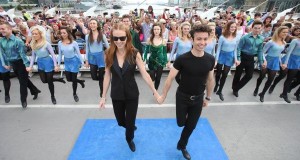 It is no surprise that Riverdance would be to the fore in July 2013 when yet another world record was to be attempted and achieved. The Riverdance world record would be set when a troupe of over two-thousand dancers from over one-hundred and sixty-three dance schools from an estimated forty-four international locations created a snaking line on the banks of the historical River liffey in Dublin city centre and made their successful attempt at entering the Guinness Book of Records once again.

The existing record for the longest continuing dance line was six-hundred and fifty-two dancers and was held by Naashville in Tennessee in America. In this Riverdance record set in Dublin, Dancers from Mexico, Uzbekistan and so forth took part in the Dublin performance and were led by New Yorker Jean Butler, the lead dancer in the first ever show of Riverdance in 1994.

The Gathering organised this latest world record, The Gathering is a year-long tourism drive to entice people around the world with Irish links to visit the country. Ms Butler said, “I am delighted to have had the opportunity to celebrate The Gathering through Irish dance with thousands of people over the course of this weekend,”.

Ms Butler continued, “Riverdance has played a big role in my life but it has also played a big part in bringing the joy of Irish dance and music to many people throughout the world.”

The record attempt was made close to Gardiner Street Dublin at The Samuel Beckett Bridge, the exact number of dancers who lined the Liffey around the Samuel Beckett Bridge will be verified by Guinness World Records. More than 2,800 dancers had been named to take part, however, exact numbers must be verified by The Guinness Book of Records Officials, however, officials have already said this is a world record by any previous standard, and will be verified very quickly.

Riverdance returns home to Dublin for an extraordinary 10th summer season at the Gaiety Theatre. 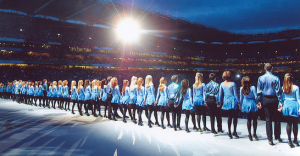 Of all the performances to emerge from Ireland, nothing has carried the energy, the sensuality and the spectacle of Riverdance.