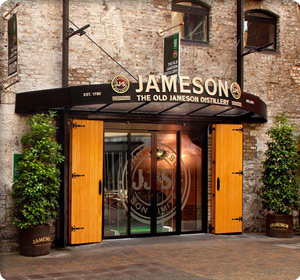 “Whiskey gets rid of ticks off dogs,” Andrea Jameson confides, as she pours tea in the informal sitting room of her family home, Tourin House, near Cappoquin in Co Waterford. There is a second, formal sitting room, with dramatic red walls, china cabinets that look like they could be in the Victoria and Albert Museum, and an enormous, delicate, beautiful chandelier that resembles spun sugar.

“But we prefer this room, because it’s warmer,” Kristin Jameson explains, gesturing towards the wood-burning stove that is swallowing some of the chilly air in their vast “informal” sitting room. You could hoist sails on a boat in this room, and they would touch neither walls nor ceiling. “It’s cosier,” agrees Tara Jameson.

The three Jameson sisters, Kristin, Andrea and Tara, are the ninth generation direct descendants of John Jameson, whose name is now synonymous with Irish whiskey. Their father, Shane Jameson, who was born in Tourin House in 1924, was the last named non-executive director of Jameson’s, from 1963-1988. The sisters grew up knowing things about whiskey which most people would not, including the fact that it makes ticks fall off dogs.

Kristin, Andrea and Tara’s grandfather, Thomas “To” Jameson came to live at Tourin House when he married Joan Musgrave. The Italianate-style house was built in 1840 by the Musgraves, although the tower house on the land, which is visible from the informal sitting room, dates from 1780.

Their father Shane, and his brother Julian, grew up here, alongside many other family members. “When Daddy was a child, there were three generations living in the house, plus an aunt and uncle who sort of turned up and stayed, and a few others floating around,” Kristin says. “There were 12 staff working in the house then, and 12 in the gardens.” Today there are two staff members employed at Tourin, one in the house, and one in the gardens, both of whom the sisters consider to be part of their family.

Of the siblings, Kristin is the eldest, with Andrea and Tara following in age. Kristin and Andrea returned to live here almost a quarter century ago, and have remained ever since. Tara is married, and lives in Waterville, Co Kerry, although when the house and gardens are open to the public, she spends most of her time at Tourin.

Of the three, Kristin looks remarkably Nordic, which is unsurprising, as their mother, Thora-Merete “Didi” Wiborg, was Norwegian. “She met Daddy on a golf course in Oslo in 1949; the one and only golf course in Oslo,” Andrea says.

When Didi came to live at Tourin, she brought with her two wood-burning stoves, then a novelty in Ireland, and a Norwegian-built rowing boat. “She wouldn’t go out on the Blackwater in anything else,” Kristin says.

Their mother planted the trees, shrubs and flowers – many of them rare species – that made the Tourin gardens famous. She also did tapestry. The cushions and chair-backs she worked in intricate needlepoint are still in use in the house today, and are some of the items affectionately pointed out to visitors by the sisters when they give tours. Their father farmed the land, started a grass-drying factory for making grass meal for fodder, and then moved into dairying.

Looking for things to do in Dublin? Come and see the Old Jameson Distillery today and experience one of the top attractions in Dublin, as rated by TripAdvisor! Join us for a journey through the remarkable story of Jameson Irish Whiskey as it unfolds before your very eyes.

Located in Smithfield, Dublin and open 7 days a week, a visit to one of Ireland’s top international visitor attractions in Dublin is an unforgettable experience. Take a tour and enjoy our hospitality. Come and experience the taste of some of Irelands’ finest Irish Whiskey, enjoy a delicious lunch in the Jameson Restaurant, or pick up one of our exclusive Jameson Irish gifts.  An experience for everyone is waiting!

There’s a host of things to do at the Jameson distillery. Three time slots available online each day. Our Tours operate every 25 minutes, all welcome! Last tour is 5.15 pm.

The company was established in 1780 when John Jameson established the Bow Street Distillery in Dublin. Jameson was Scottish, a lawyer from Alloa who had married Margaret Haig, a sister of the brothers who founded the main Haig firms, and related to the Steins, a Scottish distilling family with interests in Dublin. Portraits of John and Margaret Jameson by Sir Henry Raeburn are in the collection of the National Gallery of Ireland.

Originally one of the six main Dublin Whiskeys, Jameson is now distilled in Cork, although vatting still takes place in Dublin. With annual sales of over 31 million bottles, Jameson is by far the best selling Irish whiskey in the world, as it has been sold internationally since the early 19th century when John Jameson along with his son (also named John) was producing more than a million gallons annually.