Posted on 8 August 2013 by Lord Gardiner

Since its opening, The Merrion luxury hotel in central Dublin has established itself as the epitome of relaxed grandeur, welcoming Dubliners and visitors to the city with stunningly appointed rooms, crackling turf fires and a host of facilities.

The directors of the Merrion Hotel, which is considered to be Dublin’s most luxurious five-star property, are pressing ahead with a major expansion plan that would see it front on to Baggot Street around the corner from its main entrance opposite Government Buildings. 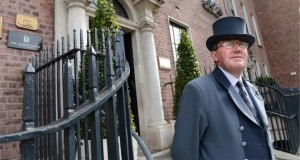 Landmark Investment Company, the company that owns the hotel, is working on a plan to demolish an office building on Baggot Street and replace it with either a block of luxury suites and penthouses, or a number of residential apartments linked to the hotel.

Landmark is 50 per cent owned by the Hastings hotel group from Northern Ireland, with the other half jointly owned by ESB chairman Lochlann Quinn and Martin Naughton, the billionaire founder of Glen Dimplex.

The company has already obtained planning permission for both options, and this week filed another application to further refine the plan.

“It is being discussed at our monthly board meetings. It is on the agenda,” said Howard Hastings, the managing director of Hastings hotels and a Merrion board member.

The expansion also envisages an extension of Restaurant Patrick Guilbaud, the city’s only two-star Michelin restaurant that is a tenant of the hotel, as well as a new restaurant for the Merrion, which is regularly used by visiting celebrities and political leaders. Bruce Springsteen stayed there recently while playing a series of concert.

The hotel, which has 140 bedrooms, is housed in a series of listed Georgian buildings on Merrion Street, opposite the Department of Finance. This block would be linked to the new wing by a glass walkway through the hotel’s central courtyard garden. 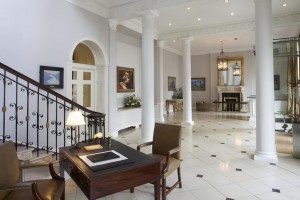 The plan would involve the demolition of JWT House, a 1970s building owned by the hotel that is located around the corner on Baggot Street. The ground floor of this building housed a Burger King fast food outlet for several years.

A new, five storey-over-basement extension to the Merrion in place of JWT house would then front on to Baggot Street. The ground floor of this wing was to be set aside for retailing with the next three floors pencilled in for more than 20 suites. A hotel penthouse and garden terrace was slated for the top floor of the extension.

Another version of the plan for which the Merrion has also obtained permission, however, would see this block replaced with four floors of luxury apartments.

Hastings said it had not yet been decided by the directors which option to take.

“There could be an element of apartments in the scheme, so we might wait and see if there is a market for them first. But we believe it would be a popular location,” he said.

“We want to get it over the line for planning first, before we think about our next move. We will turn our minds to the timing and funding of the plan once we get it past planning.”

The hotel has annual revenues in excess of €15 million, and records profits of more than €1.5 million each year.

Landmark attributed a book value of €45 million to the hotel in its latest accounts, although it is likely to be worth more given its location.

Title to the hotel is owned by AIB, which paid Landmark about €24 million for the property under a sale and leaseback deal.

The five-star sector is leading a rebound in the luxury hotels market, according to a recent report from Crowe Horwath consultants.

Dublin hotels had occupancy of 74 per cent last year, up from 70 per cent, with rates at luxury properties increasing by up to 10 per cent.