If it’s tea-time on a Saturday, with the darkness descending forebodingly, the floodlights illuminating Thomond Park, an English side in town, a febrile Red Army in full voice, then it must be the Heineken Cup. And, naturally, Munster must be in do-or-die mode. 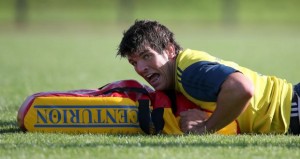 Munster rarely make things easy for themselves or their supporters but normally they and the tournament organisers/Sky leave these backs-to-the-wall missions until the final round of the pool stages.

But of late, they seemingly like to pitch themselves into cup-tie mode from the off and, mindful that no team has ever progressed after losing their opening two pool matches, as with their victorious campaigns of 2005/’06 and ’07/’08 and three of the last four seasons, they have returned to their citadel needing to overcome a first day loss.

The backdrop is a little more unnerving this time though, for while it’s one thing to lose in England or France, it’s another to lose in Scotland against a team bottom of the Rabo Pro12. The other caveat of course is that there for the first time since they became a force in Europe, there is no Ronan O’Gara to pull the strings an kick the goals.

In response to that “embarrassing” defeat in Murrayfield, Rob Penney has changed half the pack by recalling Damien Varley, BJ Botha, Donncha O’Callaghan and captain Peter O’Mahony at the expense of Mike Sherry, Stephen Archer, Paddy Butler and James Coughlan, with Donnacha Ryan shifting to the backrow, with all but the injured Butler of the demoted quartet now on the bench.

Not surprisingly Johne Murphy, replaces Simon Zebo in an otherwise unchanged backline. In truth, Murphy was playing some of his sharpest rugby with the province in the early games of the season and had been a little unlucky to be out of the frame, while, as expected, Cathal Sheridan has been promoted to the bench as the expense of Duncan Williams.

In their hour of need, the net effect has been to give the Munster pack an altogether more seasoned, grizzled and gnarled look, as well as plenty of impact off the bench. In reprising his partnership with Paul O’Connell, Donncha O’Callaghan is the only survivor from the Miracle Match 11 seasons ago.

Gloucester, of course, have been here before too, and carry the scars to prove it from both that match and a trouncing at the same venue in the ensuing season, not to mention a home quarter-final defeat six seasons ago.

True to his stated intention to rotate his squad for these two matches, Nigel Davies retains just three players from last weekend’s starting line up in the win over Perpignan – Jonny May, Ryan Mills and Mike Tindall. This means Freddy Burns is on the bench and Billy Twelvetrees is rested.

The Cherry and Whites are not typical of the bruising, route one rugby favoured by most of the Premiership. But after their incisive brand of rugby saw them finish fifth last season, they have seemingly missed the grunt up front of the retired Alex Brown, the departed Jim Hamilton and the suspended Nick Wood, with Ben Morgan having temporarily lost his form. But after their late escape against Perpignan, they can afford to swing from the hip as they do.

“When the draw was made, this one stood out and we’re looking forward to it,” said Davies. “There’s a rich history between the two clubs. It’s a huge challenge for us. They’re coming off the back of, what would be for them, a bad loss and I’m sure they’re going to come out all guns blazing, which they always do at Thomond Park anyway.”

But a dozen changes looks a bit too much. Both mentally and physically, Munster’s performance in Edinburgh suggested they had invested so much in their proud defeat of Leinster a week before that there were a little empty a week later. For a team that has traditionally always drawn from the umbilical energy with their supporters, especially when cornered, one imagines they will be fully locked and loaded this evening.

In time-honoured fashion, therefore, they should have their basics in place; more cohesive and concentrated effort at lineout time, without the malfunctions of last week, and then using their maul off that, both as a means of extracting energy and spirit from Gloucester, and for getting the crowd into the game. There’ll surely be more work-rate to fill the gaps apparent in last week’s defence, and no slipping off tackles.

Combine this with, critically, more hard, direct running, as was evident in the two-try salvo mid-way through the first-half last Saturday only for them then to curiously fall away, and Munster ought to begin extricating themselves from a corner they largely created for themselves.